I promised I would show photos of Emily in her Desperately Seeking Susan jacket, so here she is in her wig and accessories with her best friend, Gianna. This is their third year dressing as various Madonnas, and there’s no end in site since there are a ton of different Madonna looks.

I wrote about making the jacket in an earlier post. 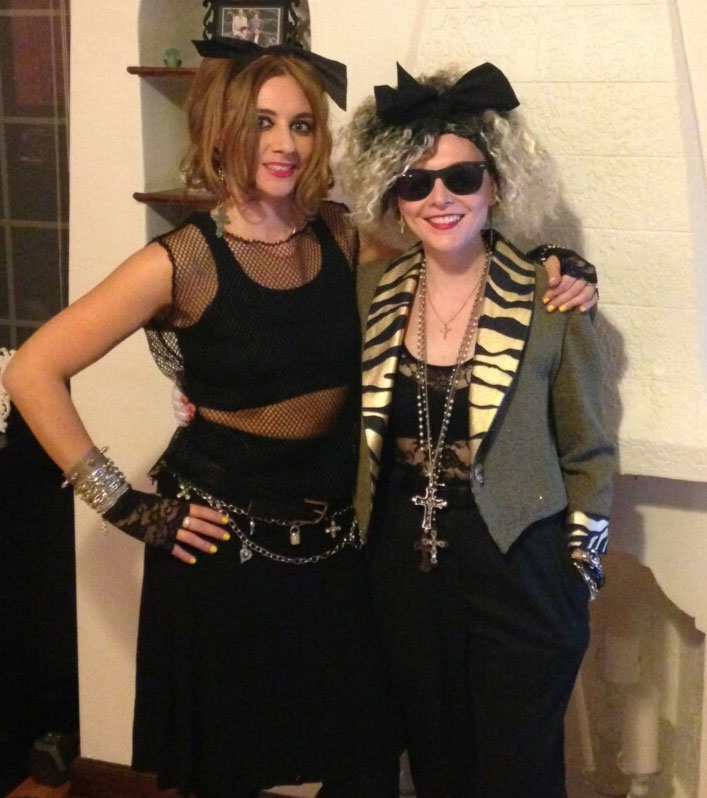 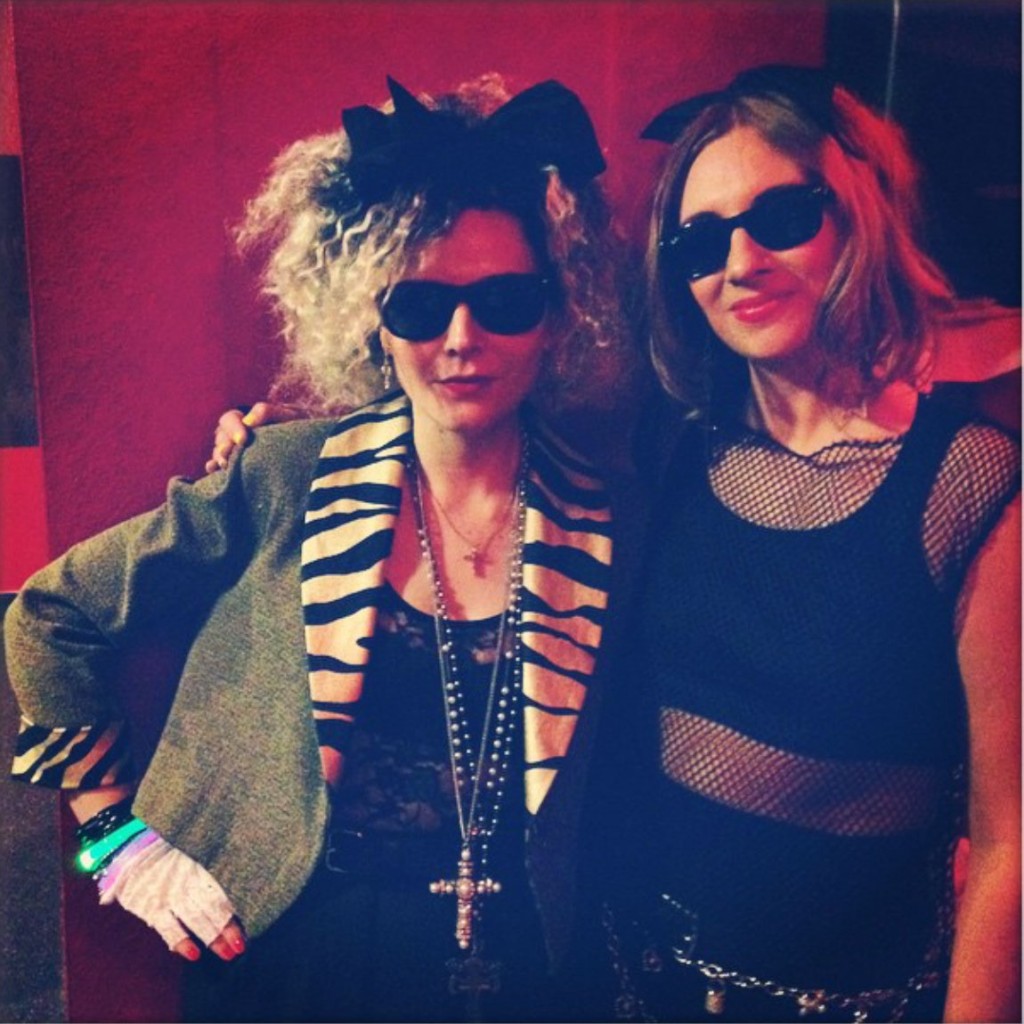 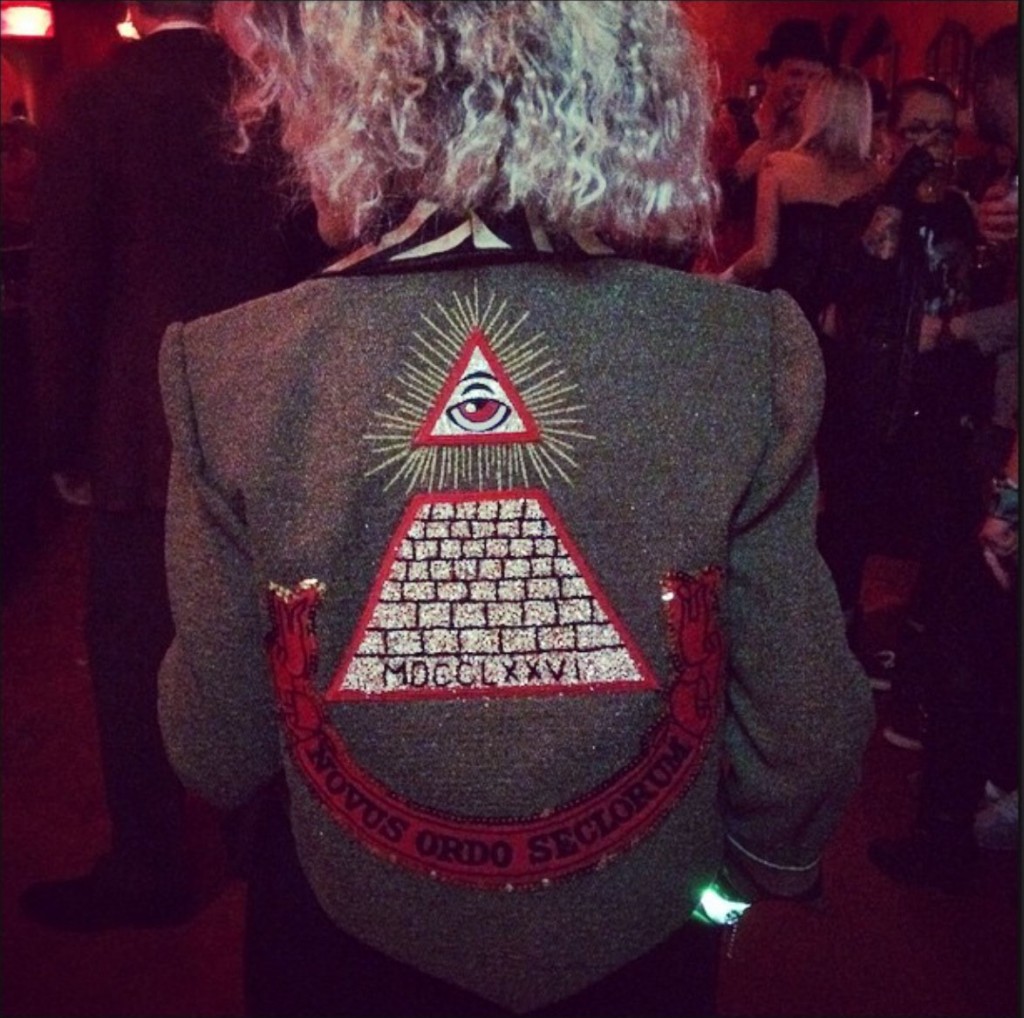 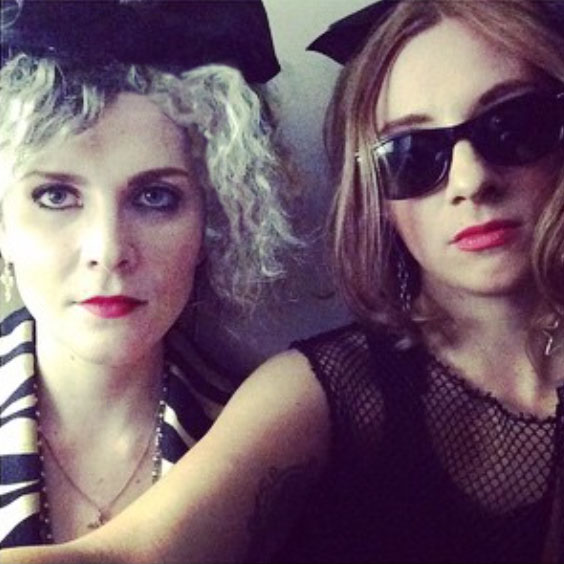 I love participating in the Blogger’s Quilt Festival because it gives me an opportunity to highlight some favorite quilts from when I first started blogging and had very few readers. This quilt has a sad story with a happy ending, which I am just going to copy here from my original post in 2009.

This was the first quilt I made from vintage fabric. The prints are more 40’s and 50’s so the colors are brighter than some of my other quilts, and it’s entirely hand pieced, which is unusual for this pattern since it’s an easy pattern to sew on the machine. When I began to seriously quilt again about 8 years ago, I wanted to hand piece everything. When it came time for the quilting, I did a couple of rows and decided I didn’t enjoy it nearly as much as the piecing. I thought about the church ladies in Ohio who had finished the quilting on my first quilt, Morning Glory in the 70’s (and several quilts for my mother and mother-in-law), and decided to contact them. Mrs. H responded that her group was still quilting and they would be pleased to finish my quilt. I packed up the quilt and mailed it the next day. About a month later I got it back and was so excited to take a look.

Well, friends, you would not have believed what I found. The poor church ladies must have been really old by then because the quilt was a complete mess — the stitches looked like a child had done them, there were really dark pencil lines from tracing the flower template, and the muslin back was covered with little blood stains. I was devastated! After I recovered from the shock, I started the process of taking out all of their quilting and doing it over — one block at a time. Here’s what I used: seam ripper, tweezers, a little cup of diluted Oxyclean, Q-tips, and a hairdryer — it took about 6 months to complete. The good thing that happened was that I began to enjoy hand quilting, which is now my favorite part of the quilt-making process. 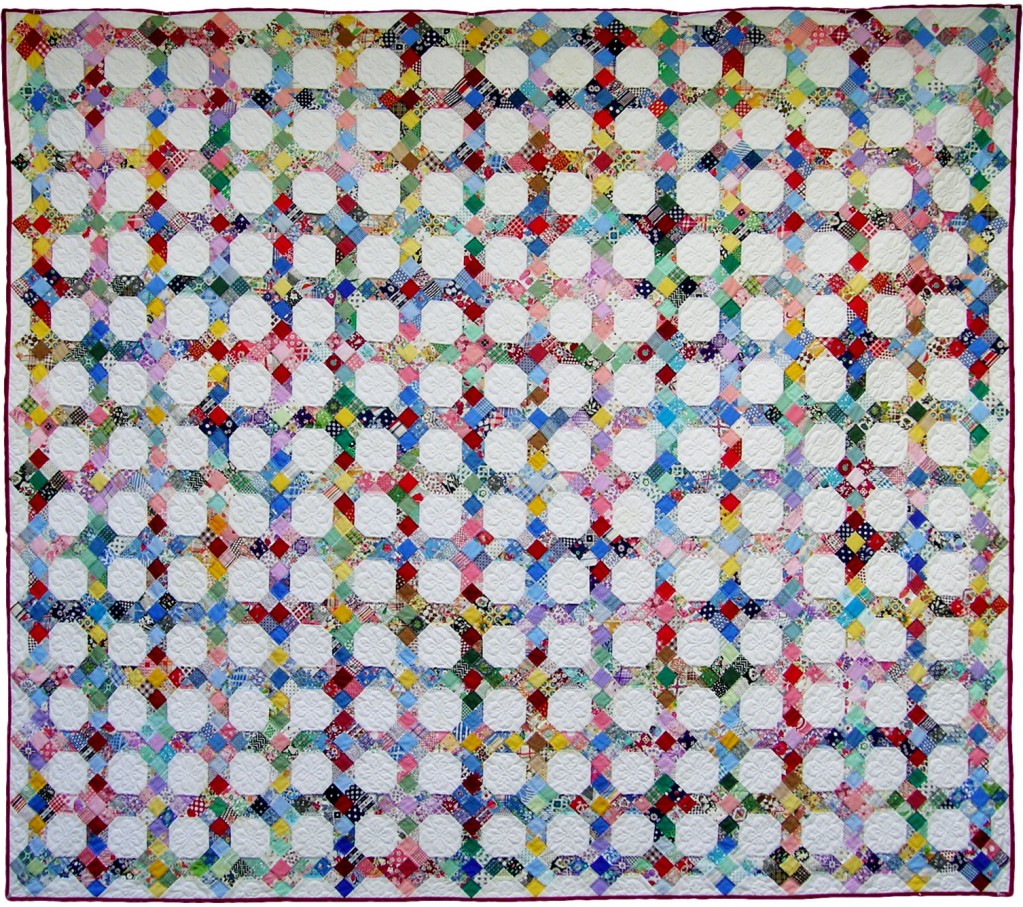 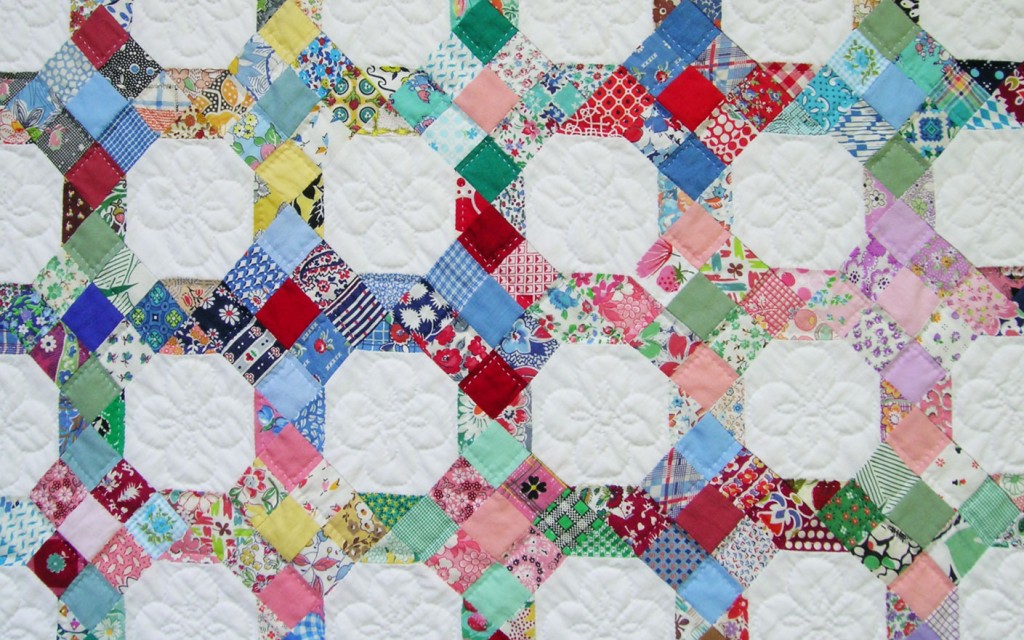 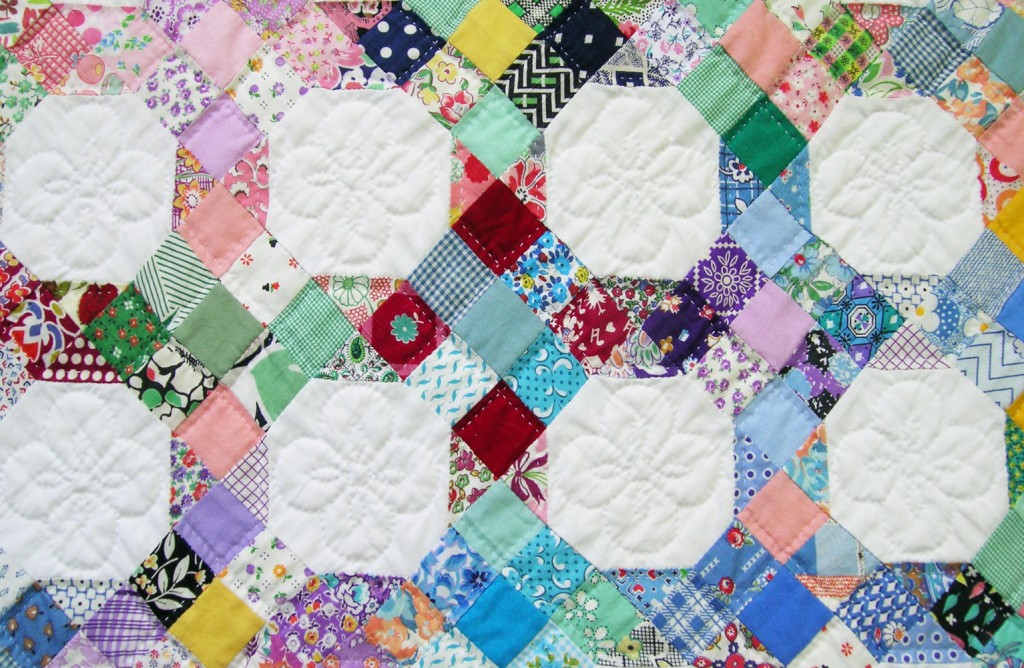 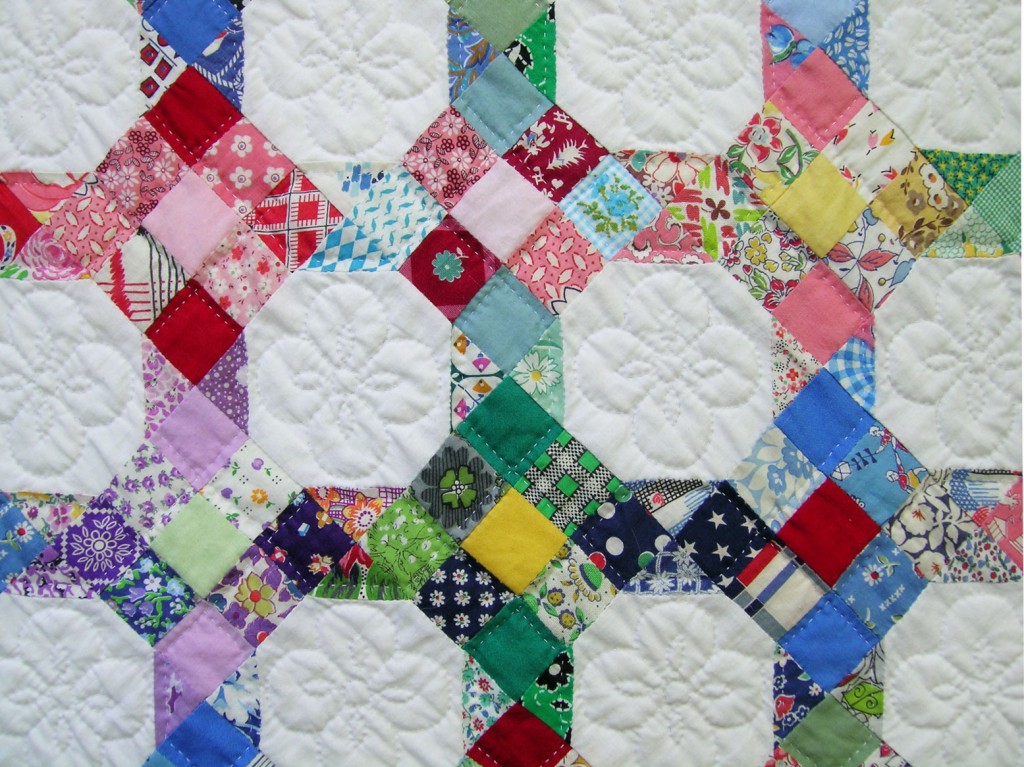 For this year’s Halloween costume, my daughter, Emily, requested the iconic Madonna jacket from the movie, Desperately Seeking Susan. Recreating this jacket was one the most fun Halloween garments I’ve ever made, and I’m really happy with the way it turned out.

Finding just the right fabrics was tricky, because Emily and I are kind of obsessive about wanting her costumes to look as much like the original as possible. The boucle fabric was a really good color match, and it has a lot of texture to it. To simulate the gold threads in the original jacket, I rubbed some fine gold glitter into the fabric. The collar and cuffs are printed stretch denim and the pyramid is a loopy textured gold fabric. The pyramid and the scroll edging were embroidered by hand — the eye and the scroll lettering are fused appliqué, and the rays around eye are machine stitched. The sequin trim is attached with hot glue. I used an 80s jacket pattern with a shawl collar, and then made the necessary changes to shorten and shape the jacket bottom, as well as shorten and cuff the sleeves.

UPDATE: Photos of Emily in her costume are available in a later post. 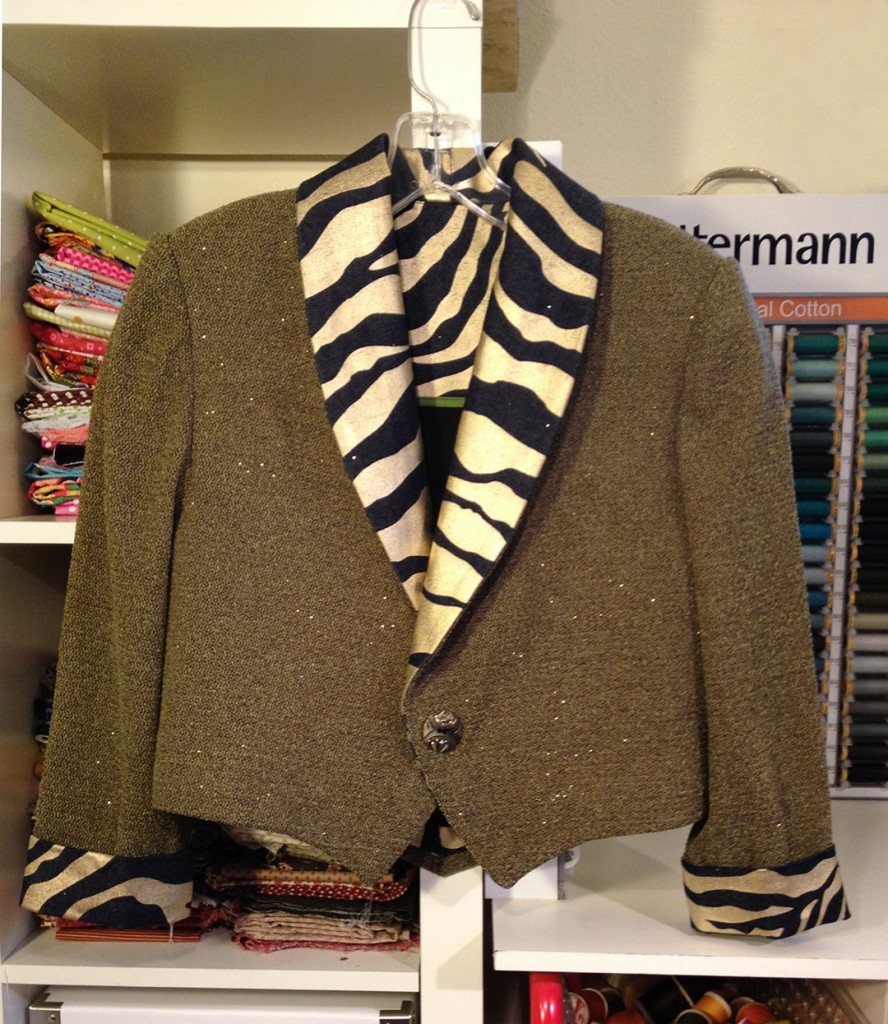 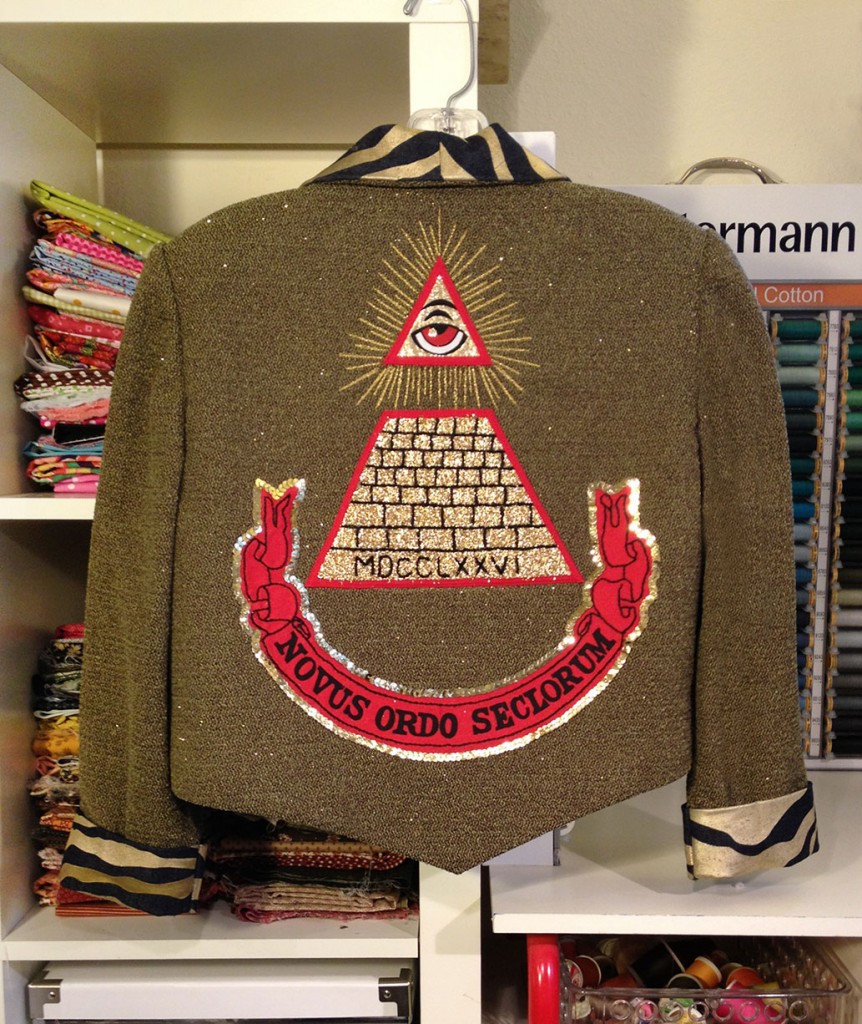 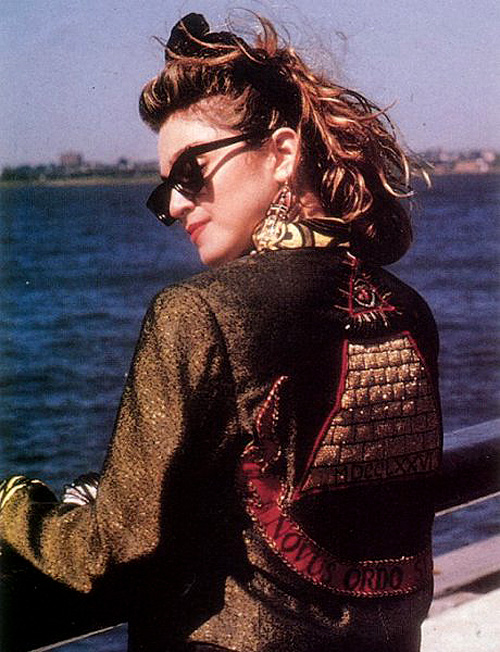 Congratulations to Sarah (commenter #25), who is the winner of the October apron. Unfortunately, there is not going to be a November apron because I am swamped with other projects until the end of November. Hopefully, there will be a Christmas apron for December, which will be my 6 year blog anniversary. 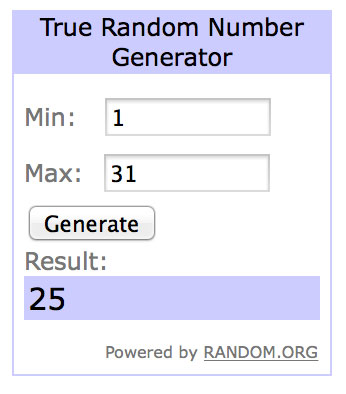 This is a newspaper apron pattern from 1960 for a trio of organdy hostess aprons, each made from one yard of 36″ wide fabric. The 30″ wide apron skirt seems a little skimpy to me, but you could make it wider using a yard of modern fabric. I do like the decorative edge, but I would want to make a deep zig-zag hem facing rather than the narrow hem that’s called for here, and that would take more fabric. Actually, I think a retro organdy hostess apron would be a nice gift, but you could also make this pattern in plain cotton. 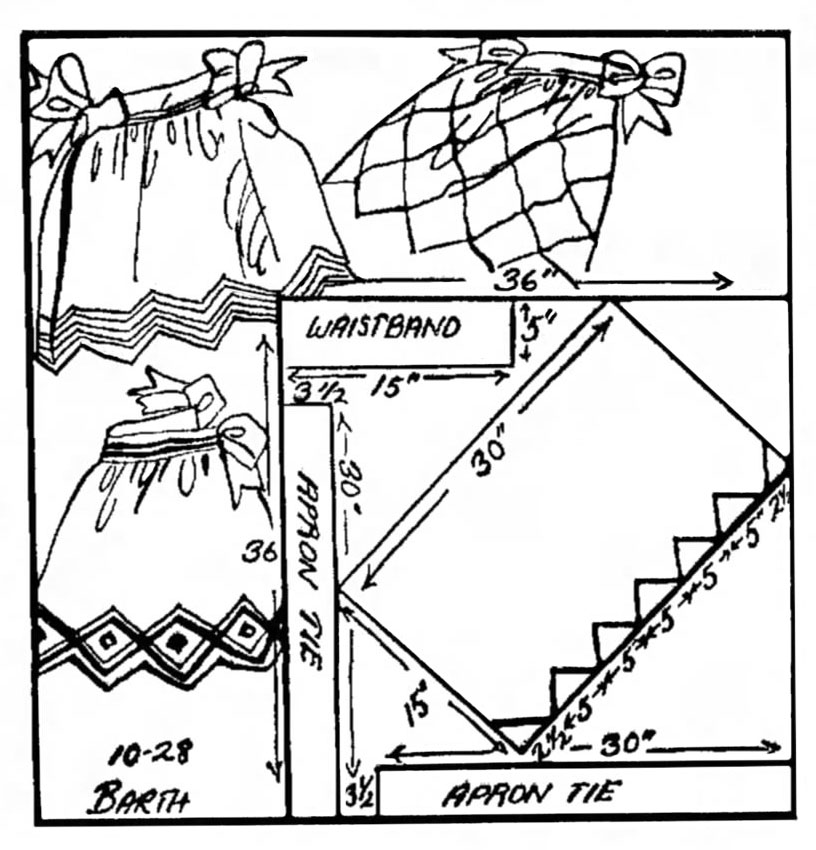 This newspaper pattern was designed by Eleanor Norris and published in 1912 on the women’s page entitled “Work and Play for the Idle Hour.”  It reminds me of the dresses my sisters and I wore when we were babies. They were made in the Philippines out of lovely pastel cottons using techniques we would now call heirloom sewing, but which were very common at the time — tiny tucks, hemstitching, and sweet floral embroideries like these lilies of the valley.

The directions call for padding the satin stitch on the flowers and dots, with vines in outline stitch. I really should try this, because I found an entire bolt of handkerchief linen at the Goodwill that would be perfect for this little frock. 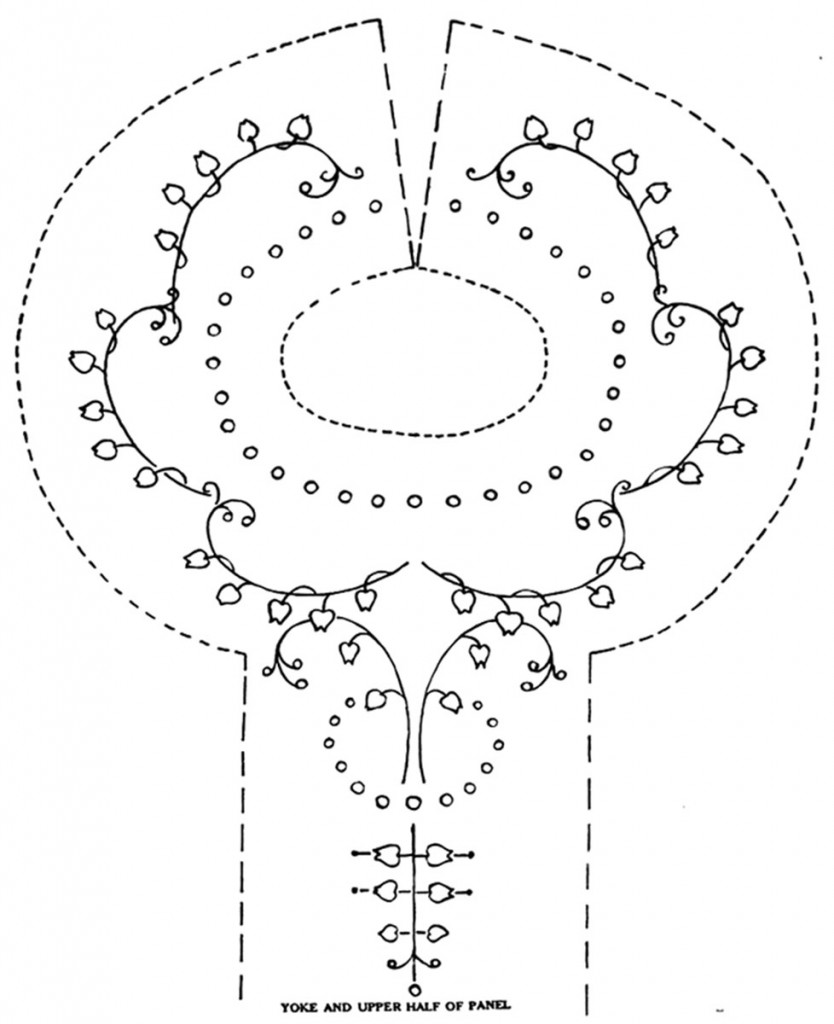 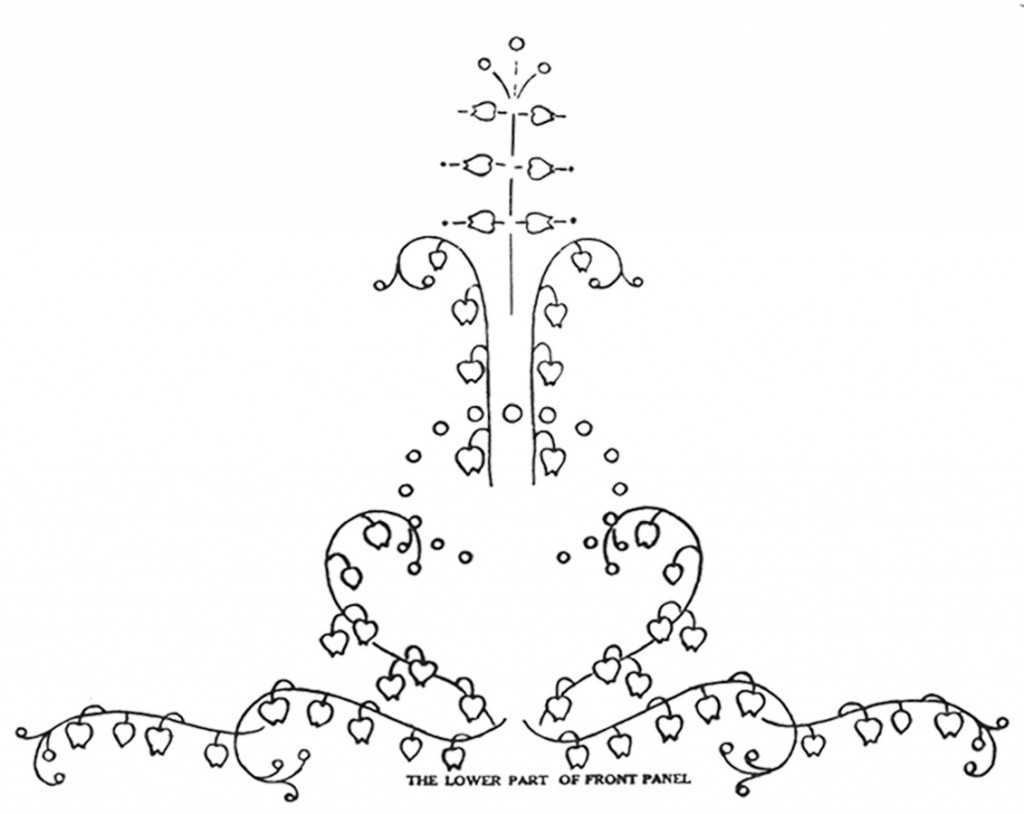 Lilies of the valley are the blossoms used in this design for an exceedingly pretty and simple little frock for the little baby. The design may be used either on a long or short dress, and may be combined with a narrow lace or hemstitching, as one desires. Fine nainsook or handkerchief linen should be selected for the dainty little garment, and the embroidery is to be executed in fine working cotton of a soft finish. Pad the little flowers slightly and work in satin stitch. The vine connecting them should be done in outline stitch. The dots are also to be padded and worked in satin stitch. The little frock may be finished about the lower edge either with buttonholes, scallops or it may be hemstitched. 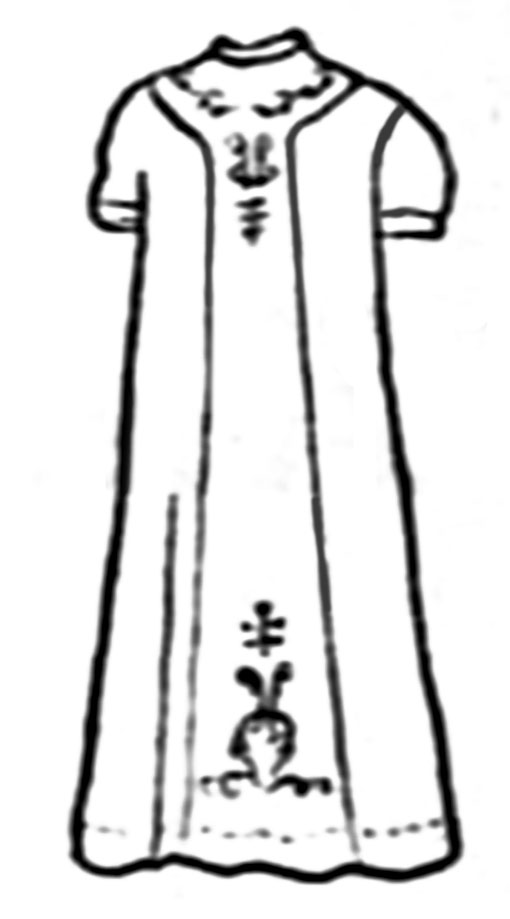 Several readers have mentioned that they couldn’t imagine cooking in my aprons. Actually, an apron in my house gets a real workout, but I don’t mind when they get a little soft and faded from many washings. My new aprons sometimes begin their lives as hostess aprons, strictly for entertaining, until a few “accidents” happen, and they begin that inevitable move down the apron ladder to an everyday cooking . . . then gardening . . . cleaning . . . and finally a painting apron. And that’s okay, because there are always new aprons to be made.

It was nice to take a break from all my other crazy projects to sew the October apron, even if it is a little late. This is a 1970s pattern from Betsey Johnson, made out of an Indian cotton tablecloth (in the spirit of the 70s).

If you’d like to win this apron, let me know in a comment below. I will select a random winner from among readers/commenters on Wednesday morning, October 15. 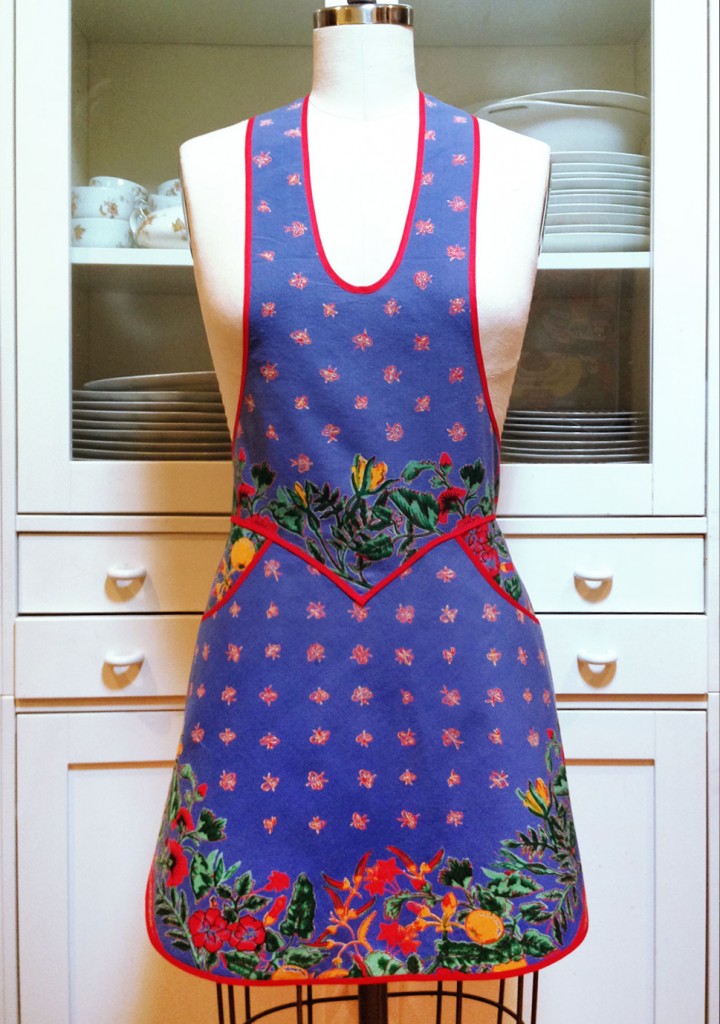 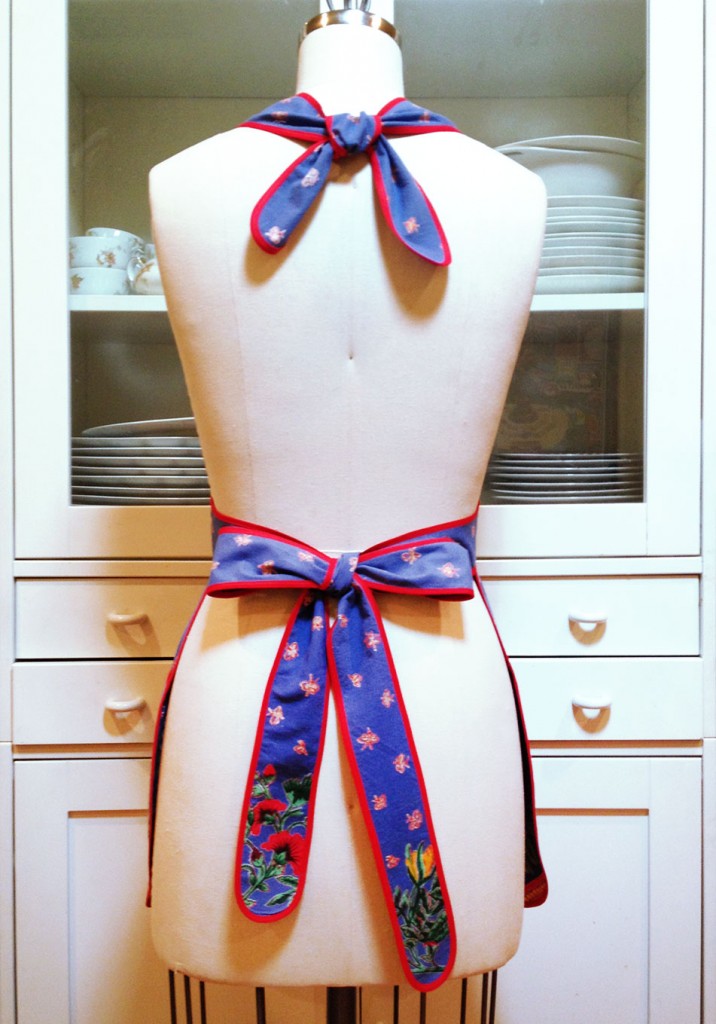 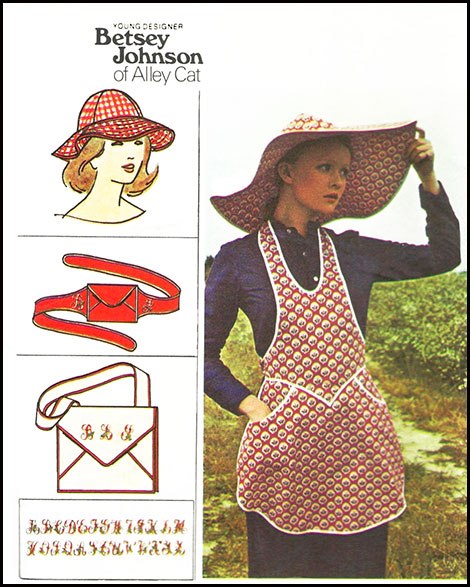