I’m not dead! It’s been six months since I’ve posted anything, and I must say that it’s very hard to get back into the routine of posting after you’ve taken a long break. Gordon and I spent about four months arranging new housing for his parents (independent and assisted living), as well as cleaning out, repairing and selling their home of 60+ years. Also, Gordon has finally retired, so we are doing more things together during the day, which means I am spending less time sewing.

Some of my break was spent reupholstering furniture, which has been a challenging but satisfying project. We purchased our living room couch when we moved into this house 26 years ago. It’s a Lane in a traditional style that was originally covered in blue brocade (I know . . . ick), but it was a subtle pattern and I liked it for a long time until I didn’t. Although the couch itself was still in great shape, the fabric was really gross. Our dog, Lucy, used to sneak in and sleep on it when no one was home, and also it was faded from the sun. My sister gave me a bolt of  yellow striped cotton which she decided not to use for her couch, so this project was practically free.

I am also recovering two matching chairs purchased from a thrift shop about the same time as the couch — one of which is finished, and the other is in progress. They’re a sort of French style, with carved wood frames, and fabric covered seats, backs and arms. Double welting covers the stapled edges.

My sister, who taught herself how to upholster, helped me with my first piece, and I’ve since done three others. This couch, however, is the most elaborate job I’ve tackled. There was more sewing involved because it has six cushions, four of which are odd shapes, but most of the project involved staples — tons of staples. I feel like there were thousands in these three pieces, which I saved in a bowl to prove to Gordon how hard I’d worked. It’s insane how many staples these professional upholsterers use — I always think they go crazy just because they can, since they’re using easy, expensive pneumatic staple guns.

There are lots of good tutorials online for learning to do upholstery (I like this one at diydesign), and even though they’re not going to be quite the same as your piece, they can still be very helpful. For the couch, I started at the bottom and just began peeling off each section, keeping the pieces intact that I would need as templates for the new pattern. I marked all the pieces with a black sharpie, making note of placement, direction, seam allowances, tucks — basically anything I could think of that would help me get the thing back together. I also tried to preserve all the little tricky devices they use (some metal, some cardboard) so I could reuse them later. Really, it’s just like a big puzzle, and if you take your time, it’s not that difficult. The very worst part is removing all the staples, and I found some new tools that made it much easier this time (shown below).

Here’s the couch while I was working on it — propped up on other furniture, including the chairs I would recover later and a piano bench with a shuffle board on top. It’s much easier on your back if you can rig up something to elevate the piece. 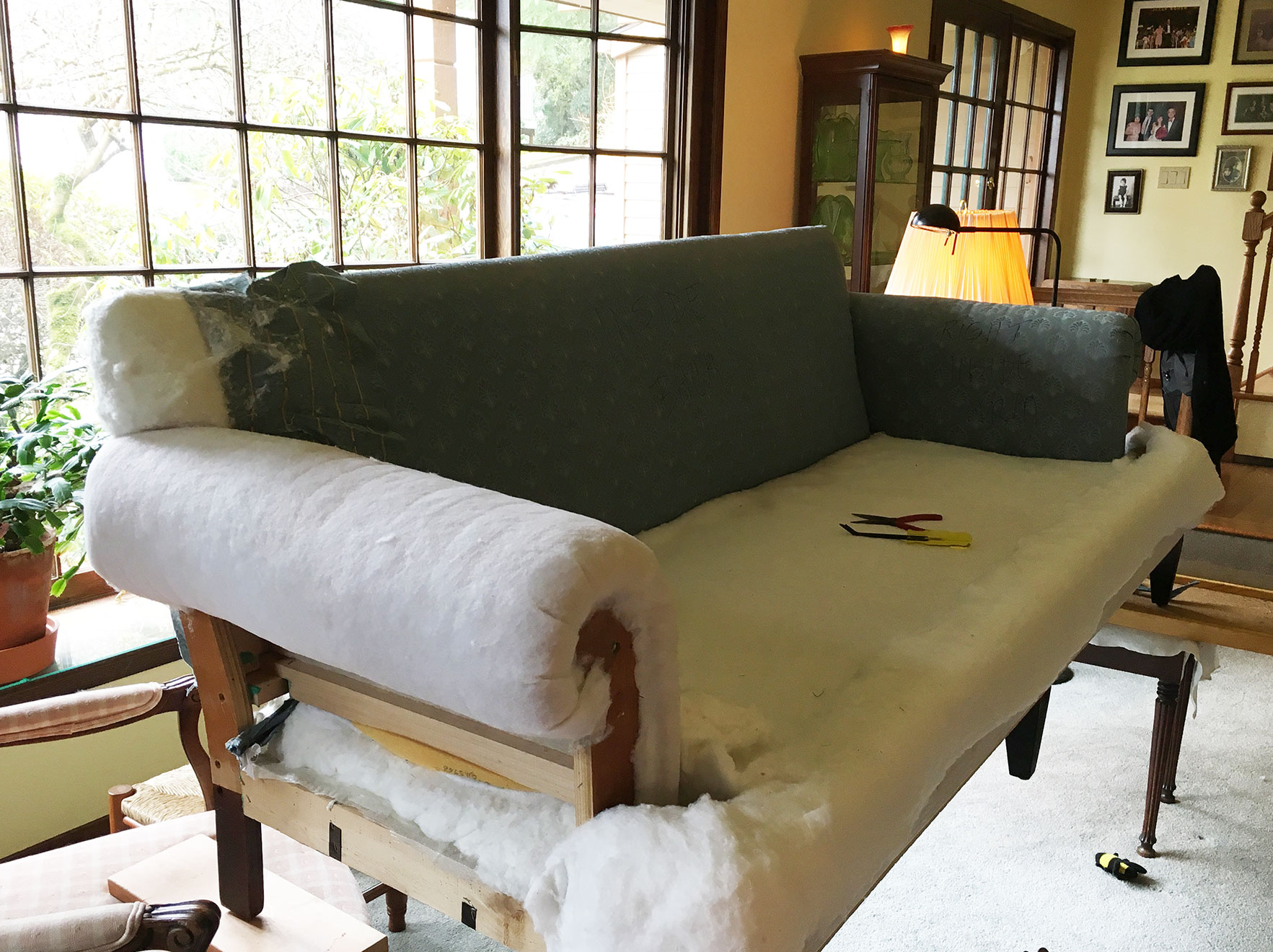 Here’s the finished couch, which I think took about three weeks to recover, but I didn’t work on it every day. The old blue fabric was very snug on the cushions, but I wanted a little softer look. I kept the bottom cushions fairly tight, but made the back cushions a little slouchier. 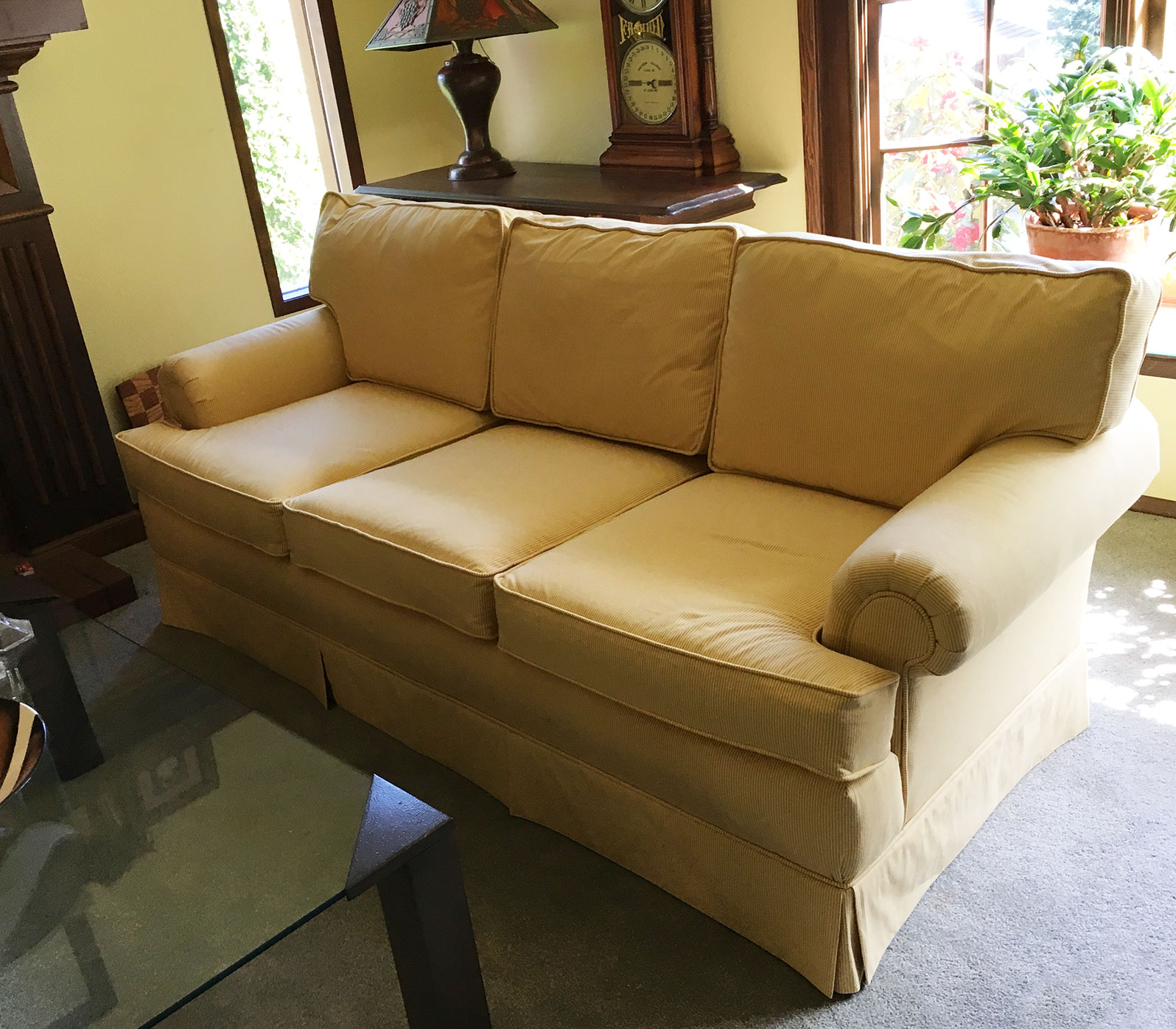 I thought the chairs were going to be much easier, because the construction was pretty simple. Unfortunately, the staple situation was horrible. The wood was much harder than on the couch, and the staples were butted up against the edge of a sort of channel in the wood which made them very difficult to pry up without gouging the wood.

What saved the day were two staple lifters — C.S. Osborne & Co. No. 763 (red handle) and No. 64006 (yellow handle). I would have given up without these tools. I also used heavy-duty pliers, a light staple gun with 3/16″ wire staples (I can’t squeeze hard enough to use the heavy duty guns, so sometimes I have to use a hammer to get the staples all the way in). As you can see in the photo below, the cotton was a little rough after I peeled it away from the fabric, so I added new pieces of quilt batting to smooth it out. 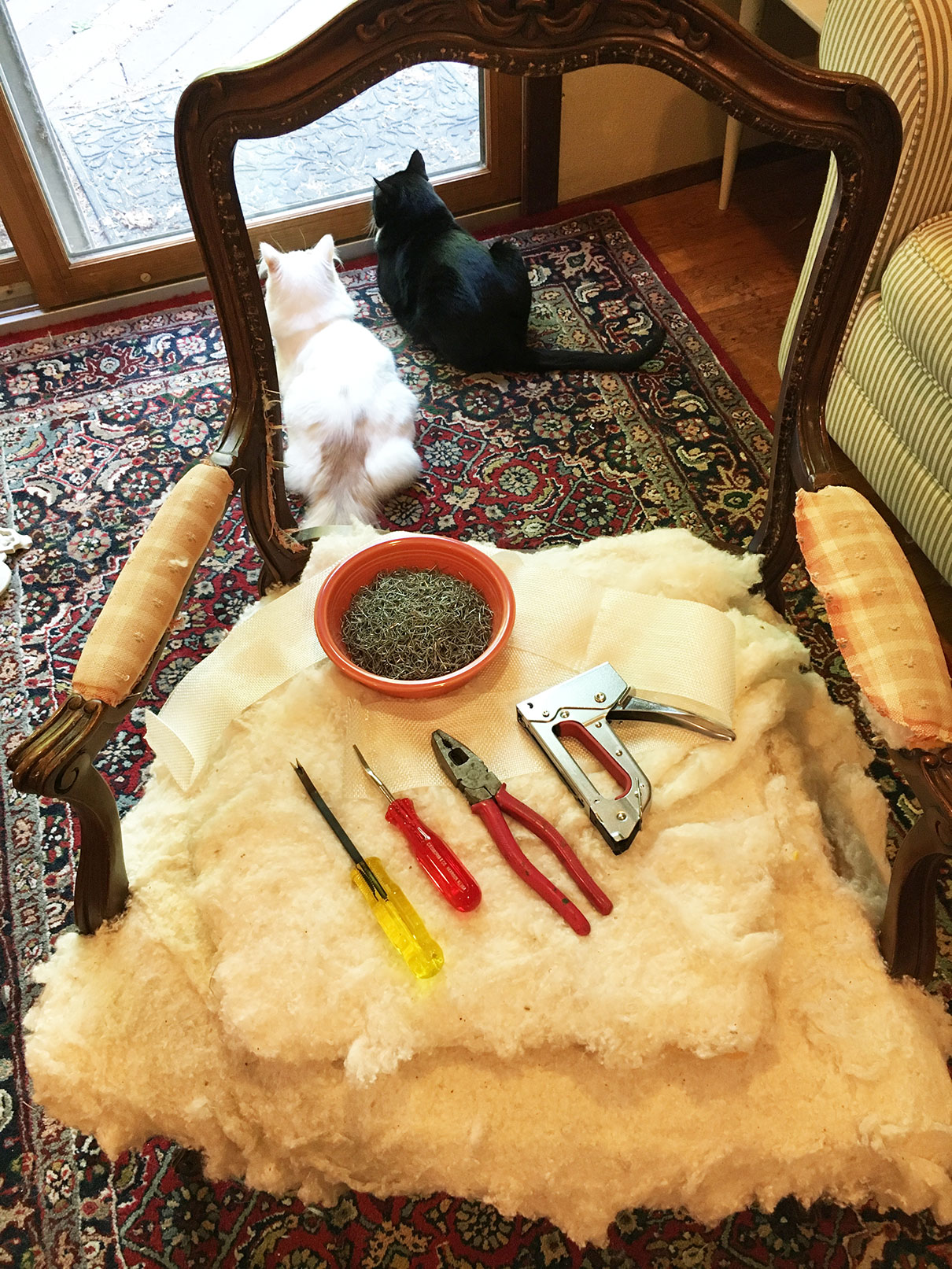 I love this linen fabric that I found 50% off at Joann’s, but it was only available online and I had to wait 3 weeks to receive it. The double welting on the chair is super easy to prepare, and there are lots of instructional videos on YouTube. The original welting was stapled on, but I always put mine on with hot glue, which works just fine and is much easier. 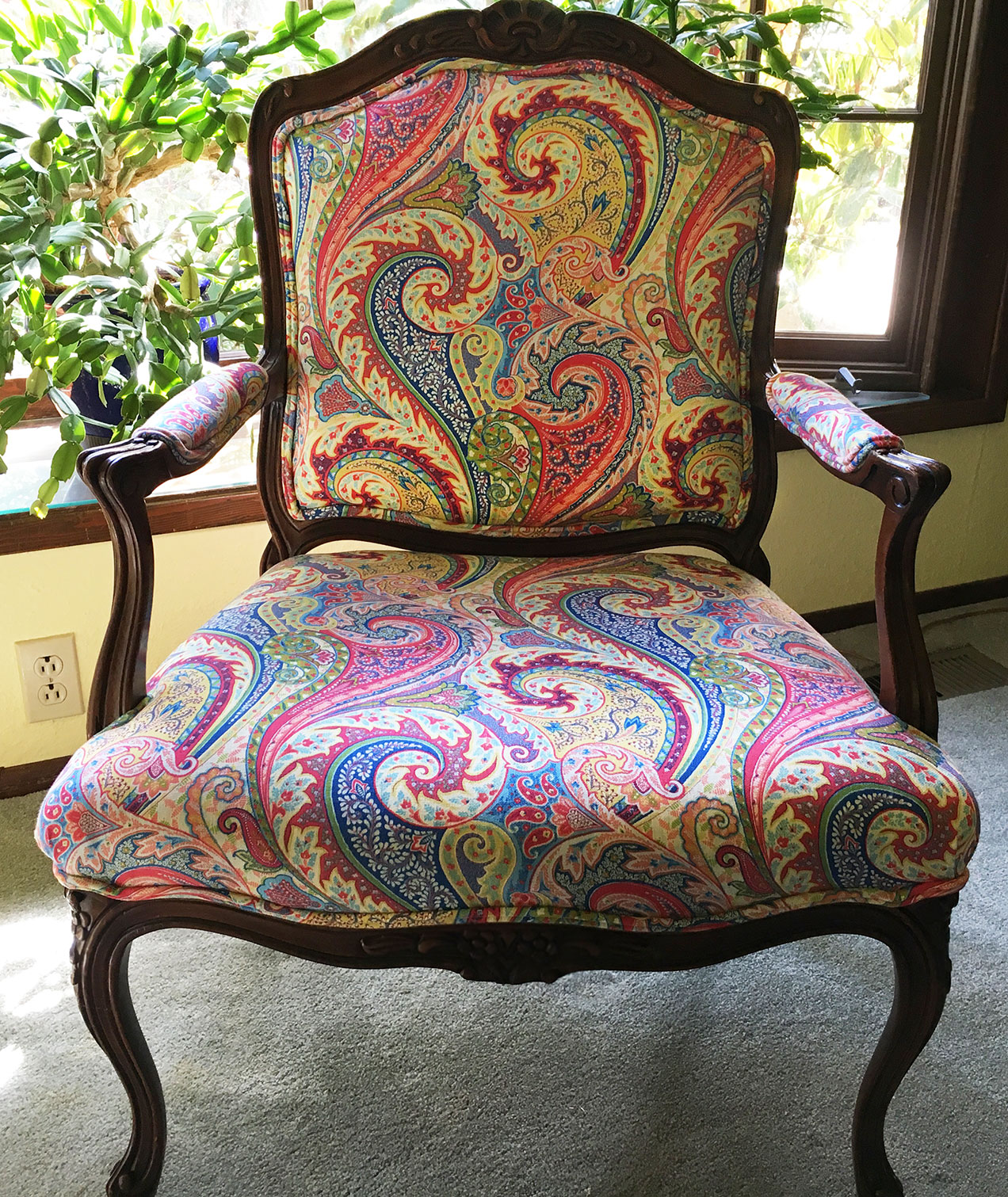 So, that’s what I’ve been doing. My plan is to post whenever I have something new, but I’m not sure how often that will be. 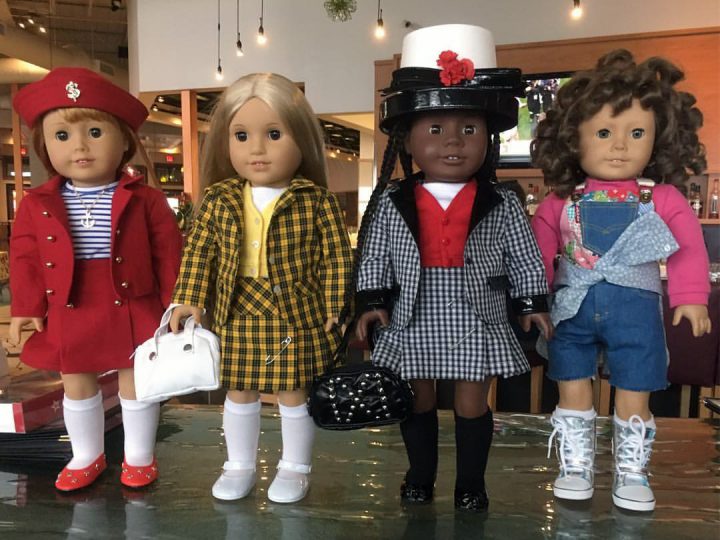 American Girl Dolls Dress up as Characters from Clueless. 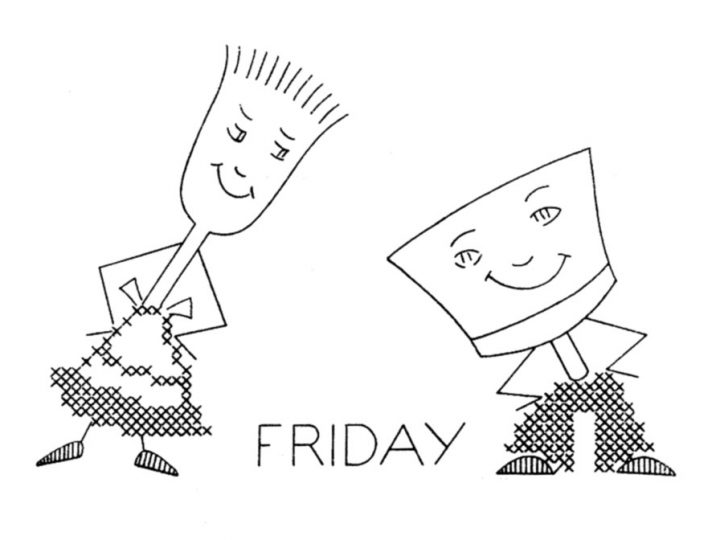