I intended to post this bear last night, but just as I was finishing up the last of the fur, I caught my cat, Jack, urinating on a pile of clothes in the laundry room. Because this is a bad habit he has acquired lately, I grabbed him to toss him outside and he decided to attack me. Although we all know he’s a biter and he has a long history of biting people when he’s annoyed at them, this was way over the top. I have 13 bite and claw punctures on my right hand and left arm, and when I woke up this morning my right hand was swollen, painful, probably infected and I CAN’T SEW! Now I get to go to the doctor and Jack gets to become an outside cat until I get over being mad.

Back to the bear….the fur was a little tedious. I’m not sure I’m getting any better at back stitch, but I am certainly getting a lot of practice. I purchased some wonderful variegated and multi-color Anchor floss from the UK and am excited to try it out. 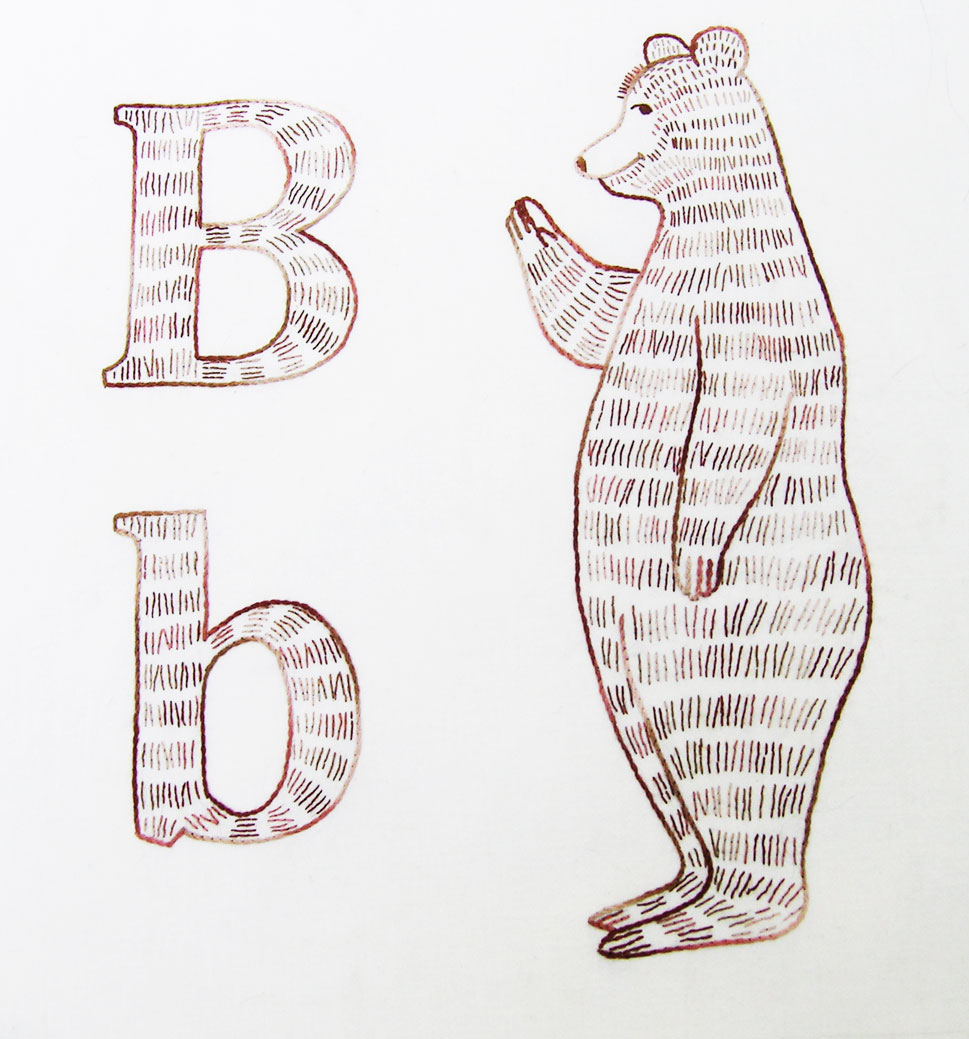 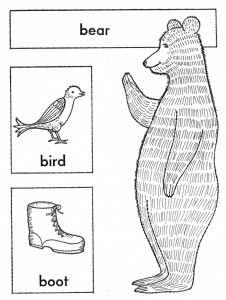 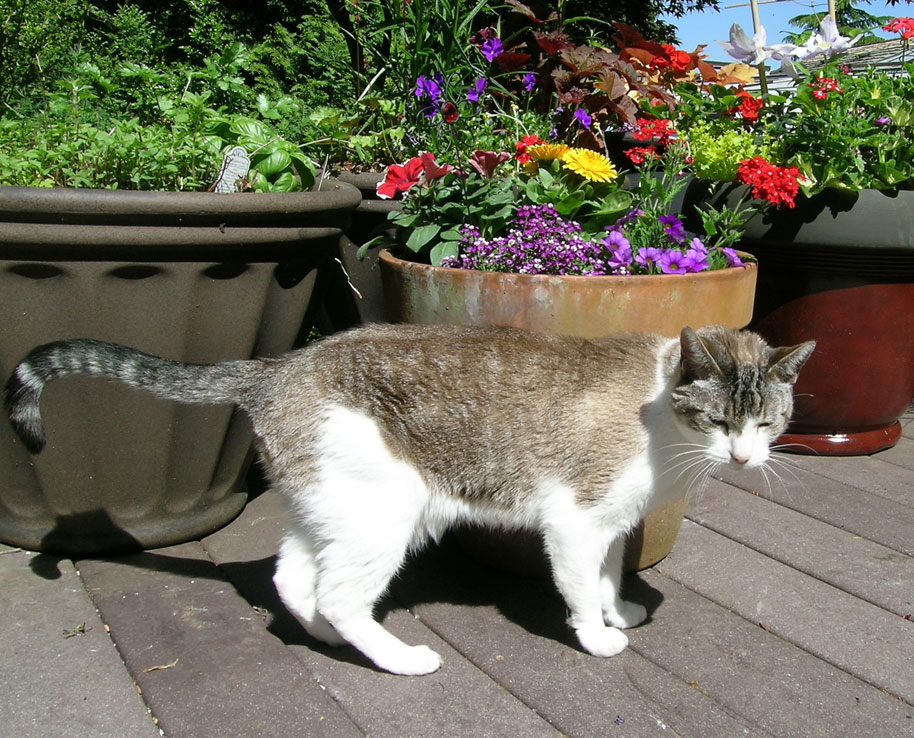 I love this lion pattern and the variegated thread looks so great on his mane. See…..I’m not always all negative about stuff I make. This ABC project is so much fun to stitch. If you are interested in making any of these blocks, I have placed a link to the pdf (52 pages) just below the photo. I shared these pages with my friend, Karen, and she is stitching them with all three designs — just like the original coloring book — and her first block is so cute. Once she has completed a few, I will post her photos here so you can see another approach.

I just noticed how weirdly different each of the white fabrics look in my photos. They are all made with the same vintage off-white sheet — it’s just bad photography on my part. 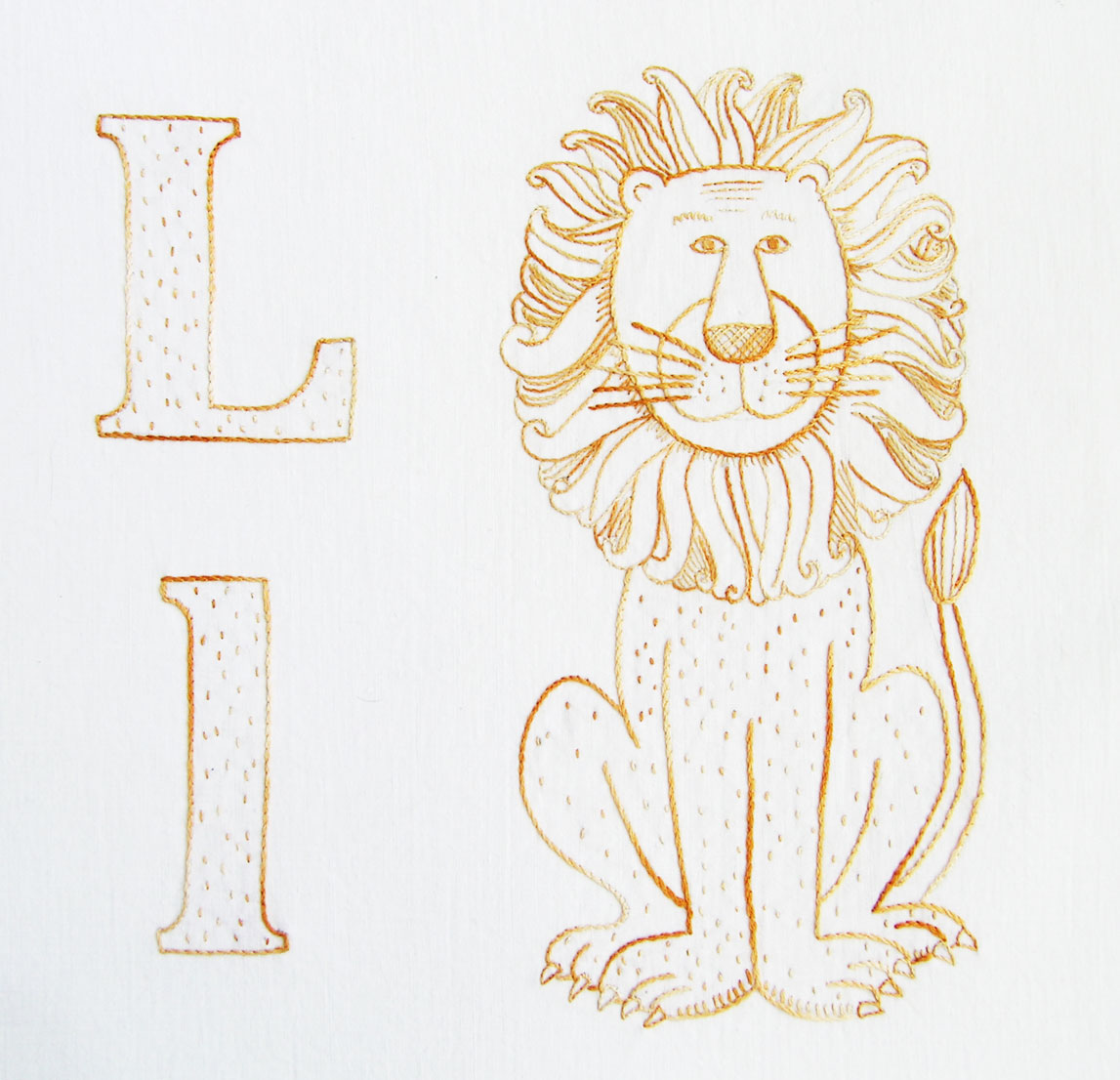 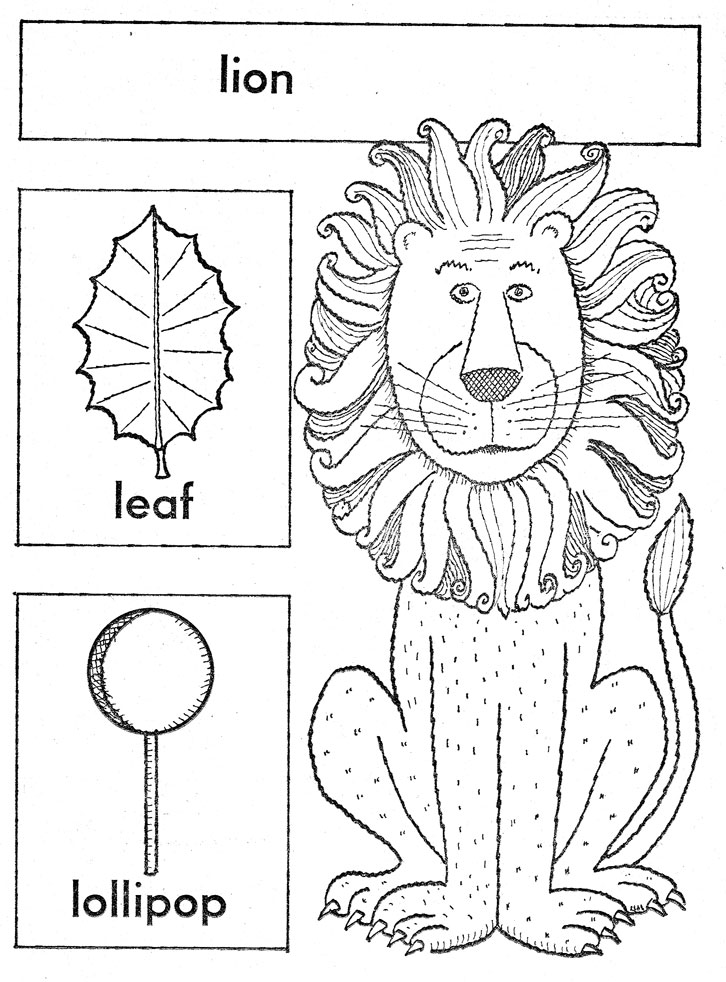 I love this doll, but I must say I could use some more practice on my back stitch — it’s hard to make all of the stitches the same size. I wonder if it would be easier if I were using more than one strand of floss. I am going to make all of the alphabet letters — I just didn’t feel like doing them in order. Actually I will end up making a few more because 26 blocks do not work well on a quilt. Since the coloring book has two large drawings for each letter, some of the letters could have two blocks, or maybe I’ll do some numbers, or something completely different. I can’t think about that right now. If I do, I’ll go crazy. I’ll think about that tomorrow. 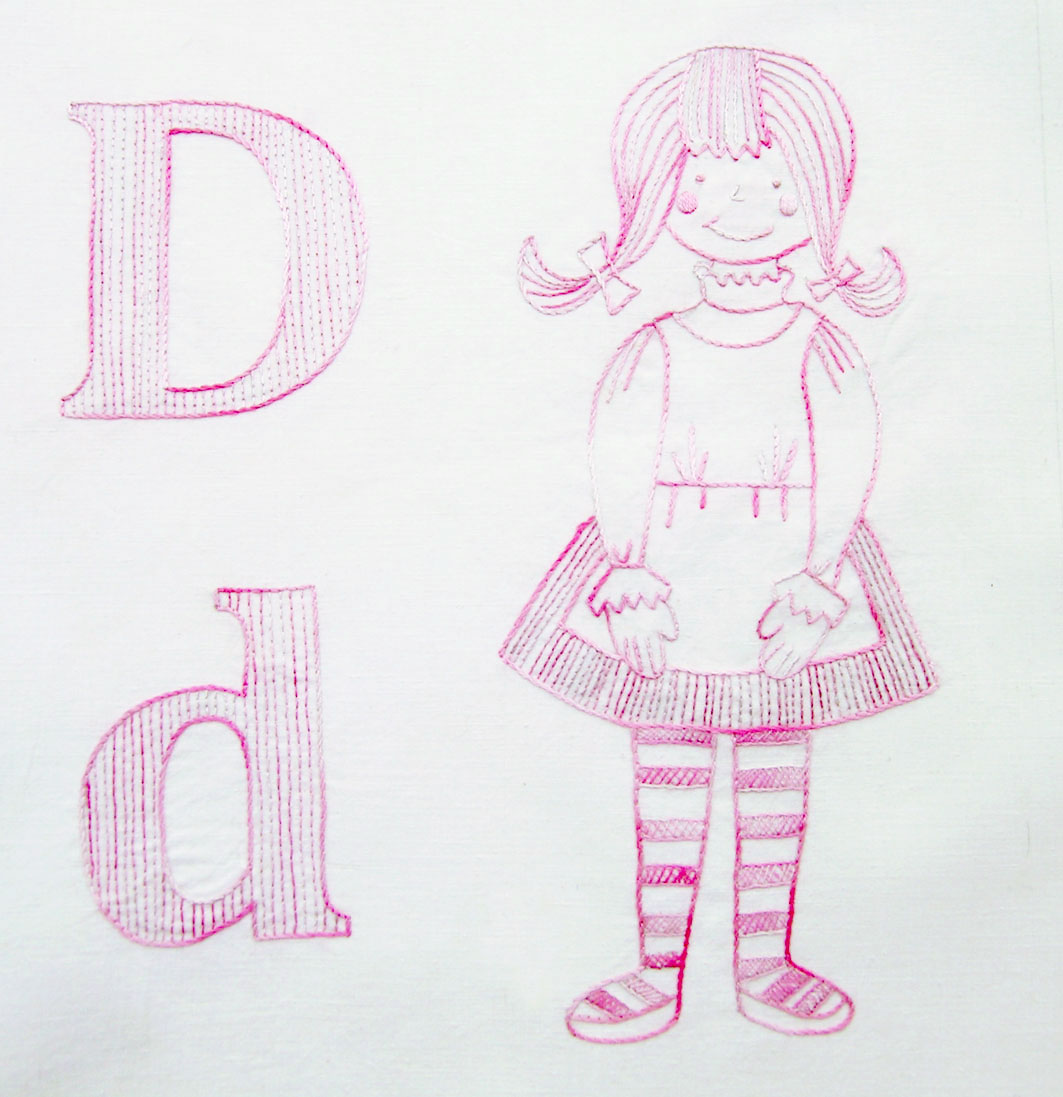 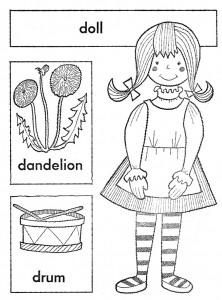 This puppet design is so cute, but my thread choice ended up being a little pale. I used an Anchor multi-colored floss (rainbow) that I thought would be perfect. I do like the effect, though, and plan to use multi-colored floss on the clown and the jack-in-the-box as well. The doll is in the hoop now and she is pretty light too (a variegated pink). I’m wondering if all the blocks are going to look good together. Although I haven’t chosen a quilt pattern, I’m thinking of using the smallest size of my 1930’s triangle swatches to make pieced sashing between the blocks. Hopefully the scrappy sashing will sort of tie the whole thing together. 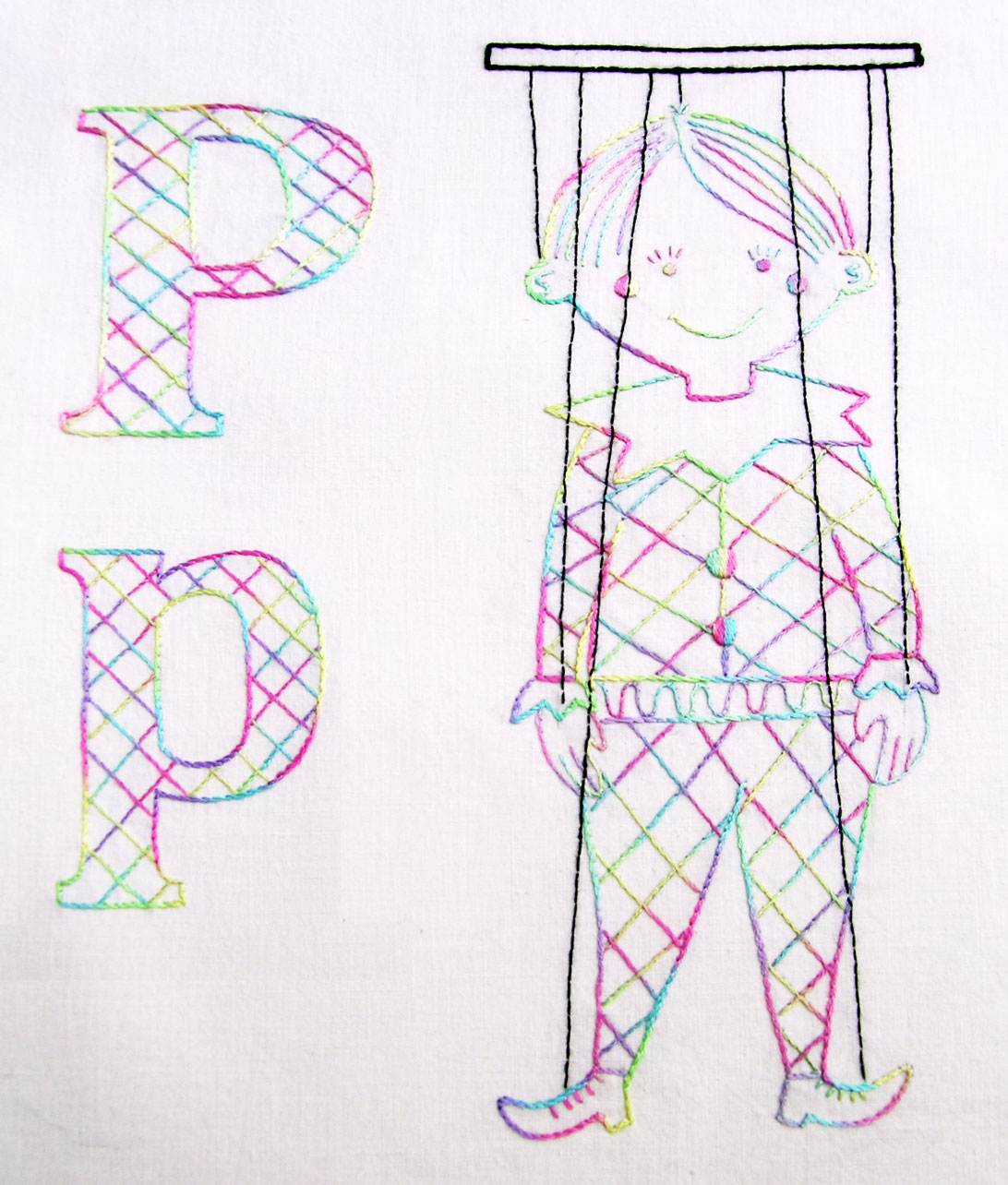 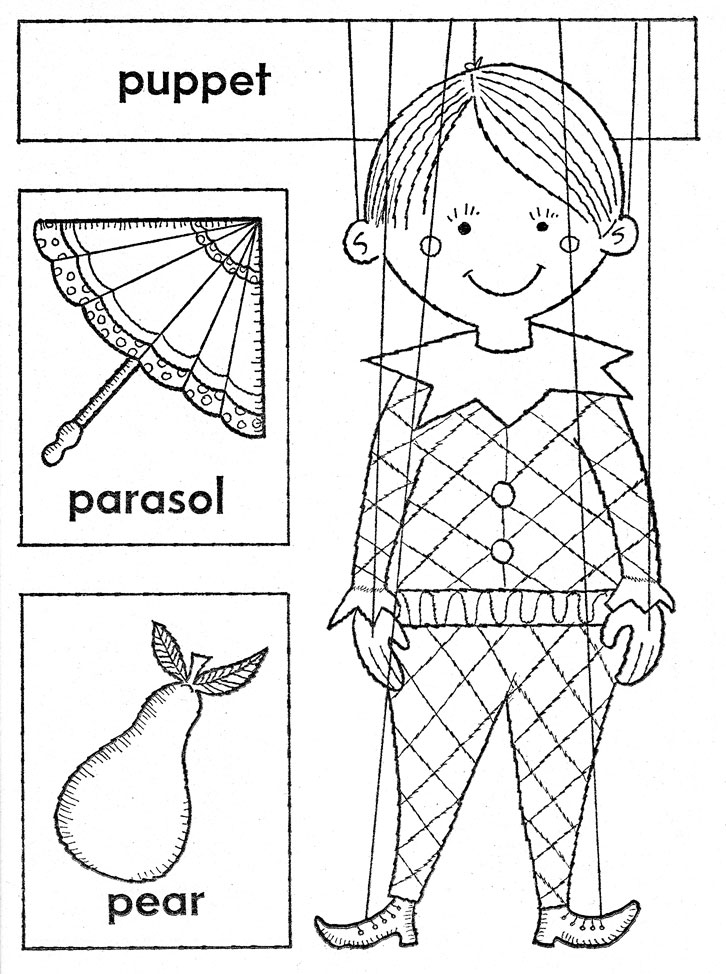 This owl took almost the whole skein of floss — and most of it was done with just one strand. It’s hard to see in this photo, but I used another variegated floss — sort of a brown/rust/red combination. It’s subtle, but I like it. I promised myself I would only do two of these, but I’ve already started a third one. They are so fun to stitch. I guess the old wool quilt is just going to have to wait a little while longer. 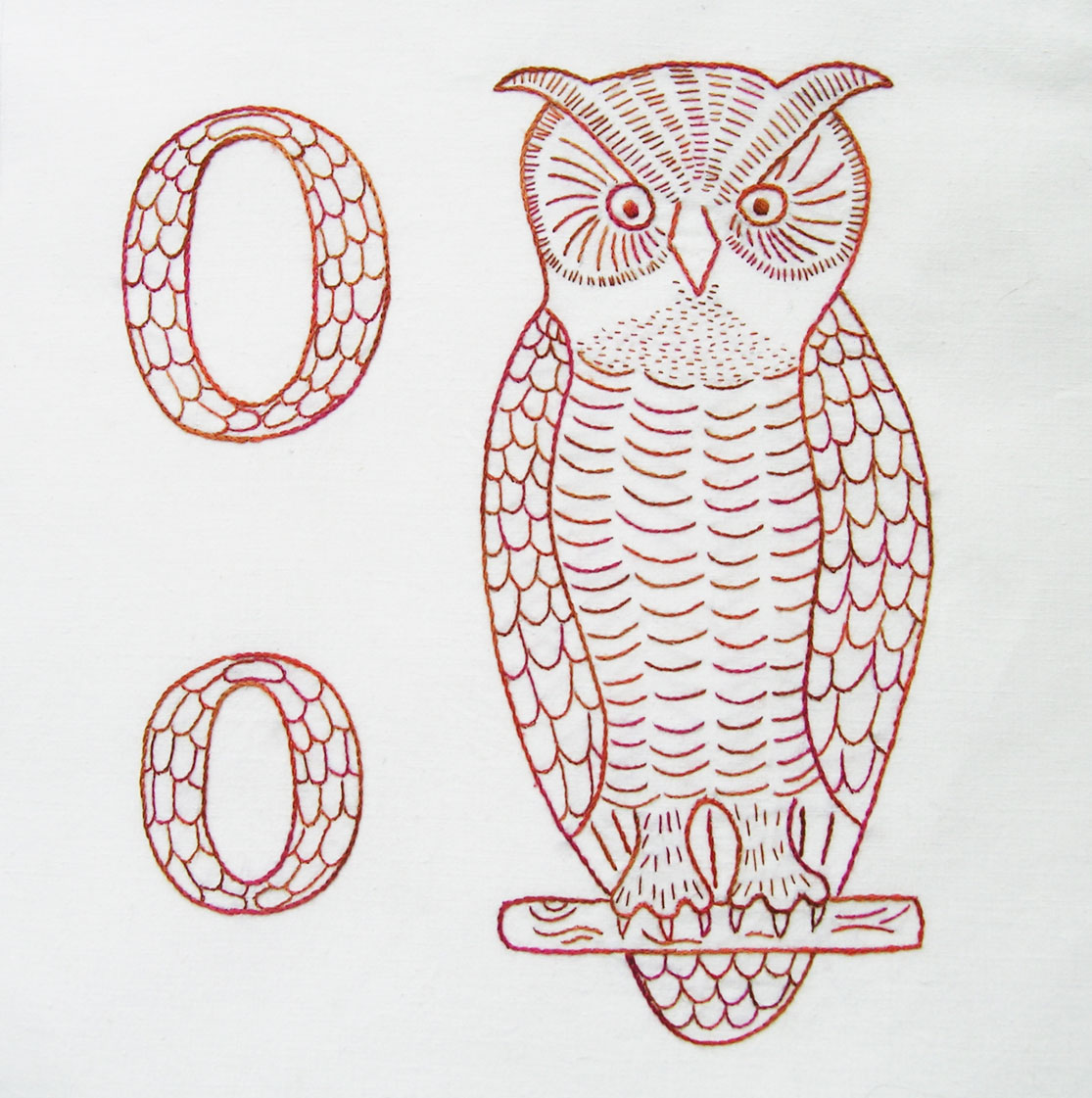 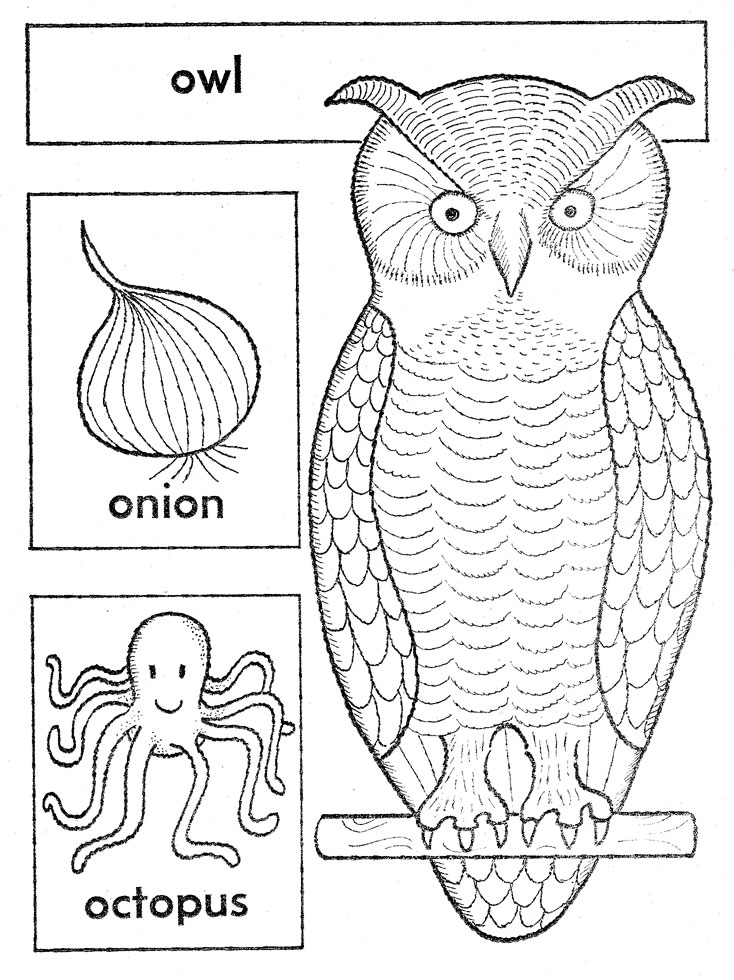 I’m pretty excited about this ABC quilt made from the coloring book I posted earlier. I should be working on the wool quilt, but I just had to see how these were going to look. Instead of the two smaller drawings, I decided to make letters instead and fill them with a pattern copied from the larger picture. The alligator has an obvious fill pattern to copy, but some of them do not so I’ll just have to make up something. This was so fun to stitch using my new DMC variegated floss. I’ve never used it before and I wasn’t sure how it would look on this project, but I’m very happy with the result.

I’m just working on the owl now, and then I must finish the wool quilt before I do any more ABC blocks. I have to admit it’s pretty nice for a change to have a clear outline to follow — the wool blocks are mostly stitched freehand because it is so difficult to draw on them (and the white pencil rubs off almost immediately).

Also, thank you everyone for your nice compliments on the pinwheel quilt. I guess it was hard for me to look at it without focusing on all the mistakes. I feel so much better about it after reading your comments. 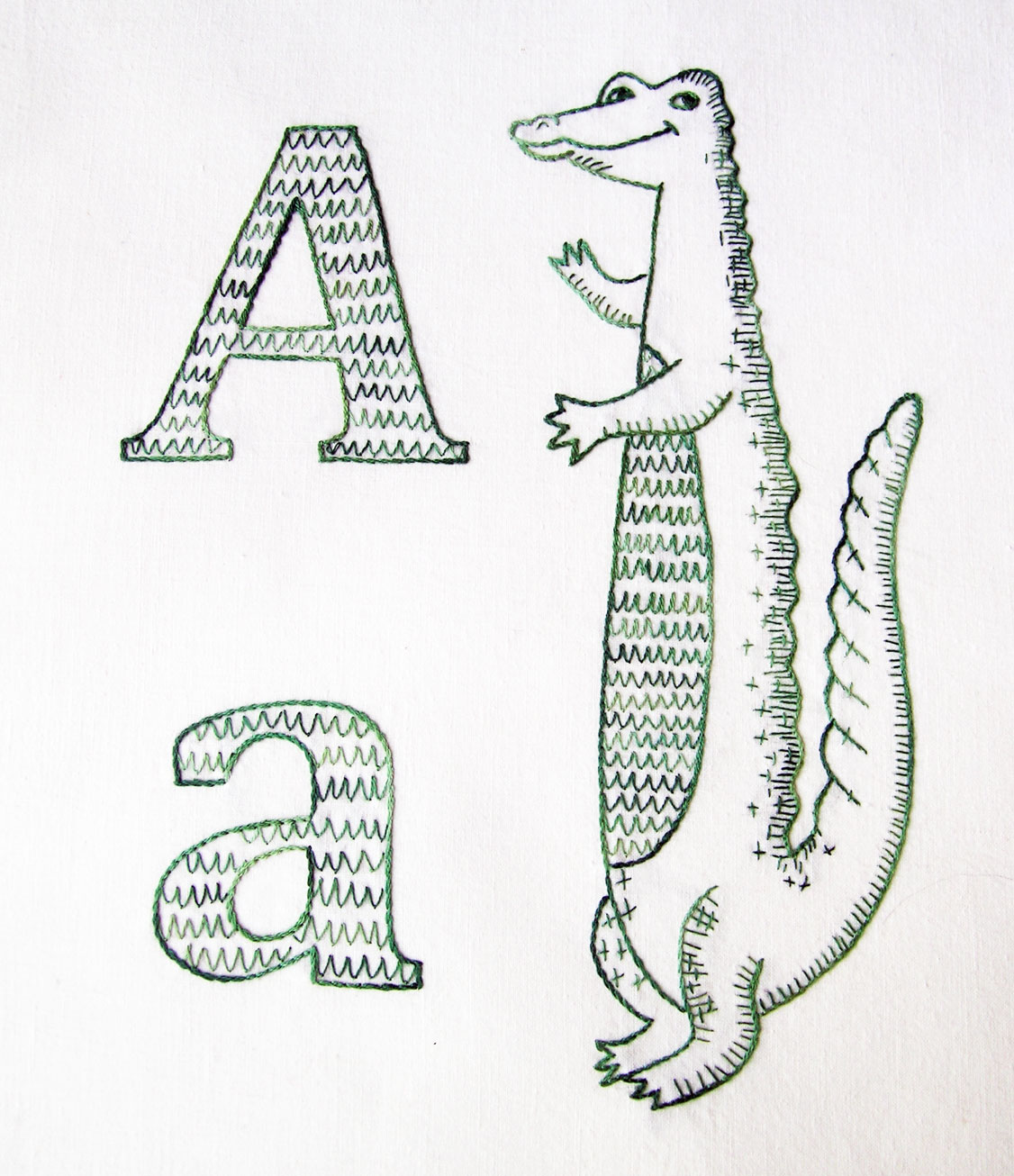 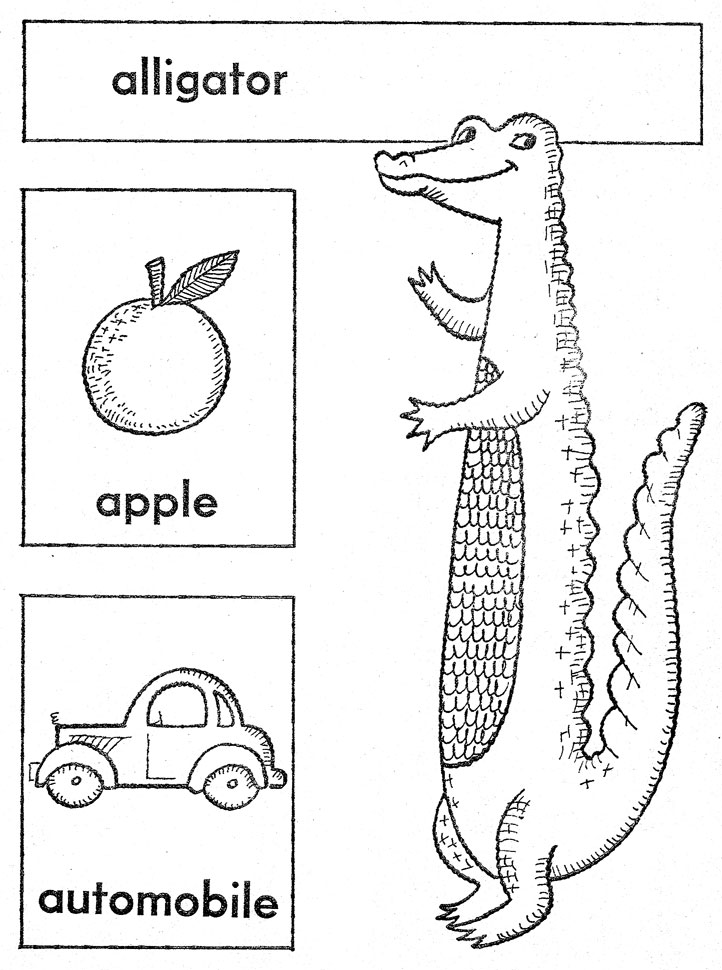 This is an Alice Brooks mail order pattern from the 1940’s, and this poor quilt has so many problems, I hardly know where to begin. First of all, I had a terrible time with the piecing — I couldn’t manage to match up all eight seams in the block corners. Out of desperation, I decided to applique additional blue circles in those spaces so I could cover up my mistakes and also remove the bulky unmatched seams behind them. Of course that messed up the quilting pattern I was planning to use, so I tried a couple of things that looked really bad…ripped those out…and finally just settled on this random, non-symmetrical pattern that I think looks not that great. On top of everything else, this is the other quilt where I mixed up my background pieces, so it contains two different fabrics — one bright white and one with a yellowish tint.

I can think of two things I do like about it — it’s a good pattern to show off my feedsack prints, and the scalloped border is a nice addition. 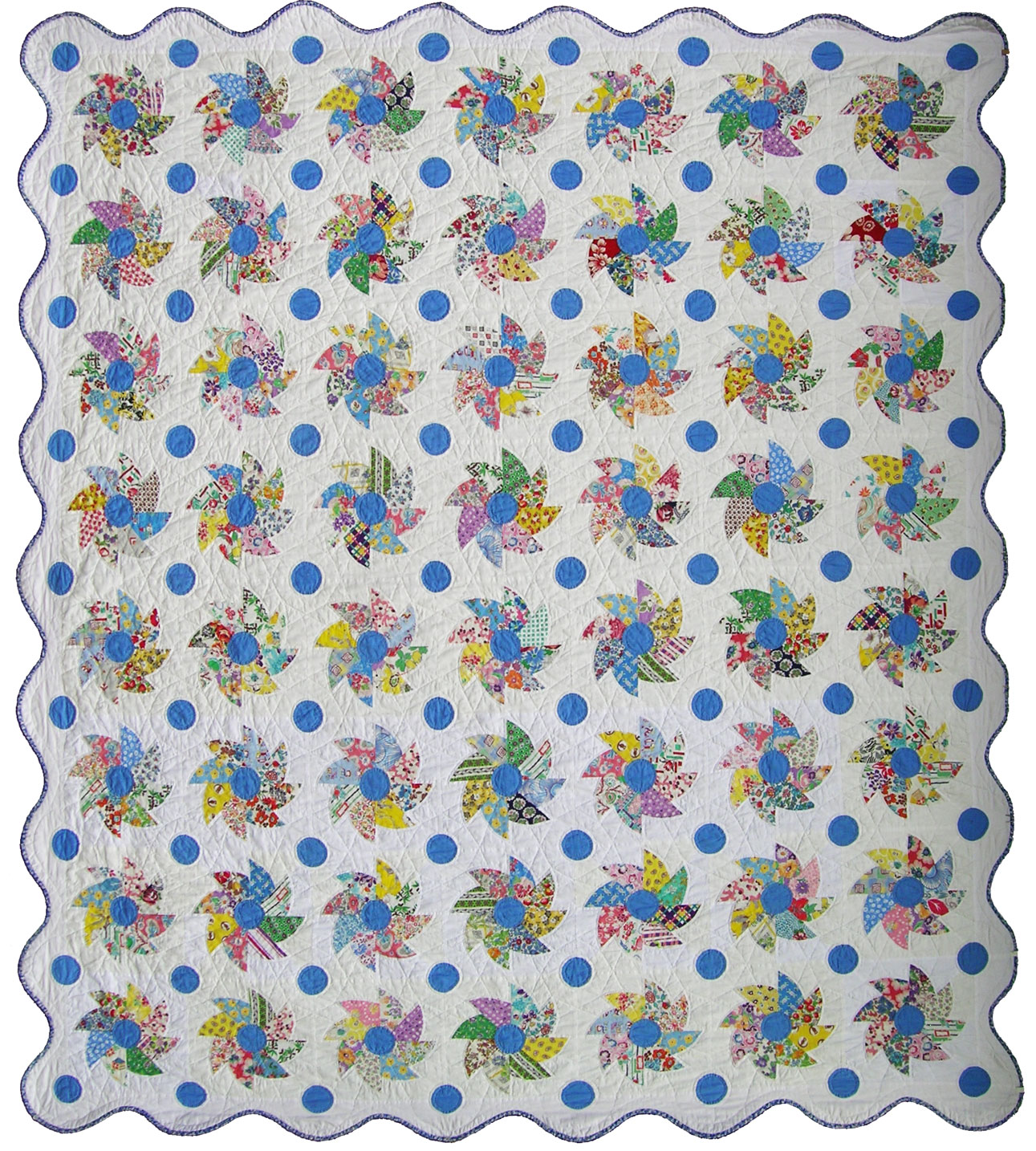 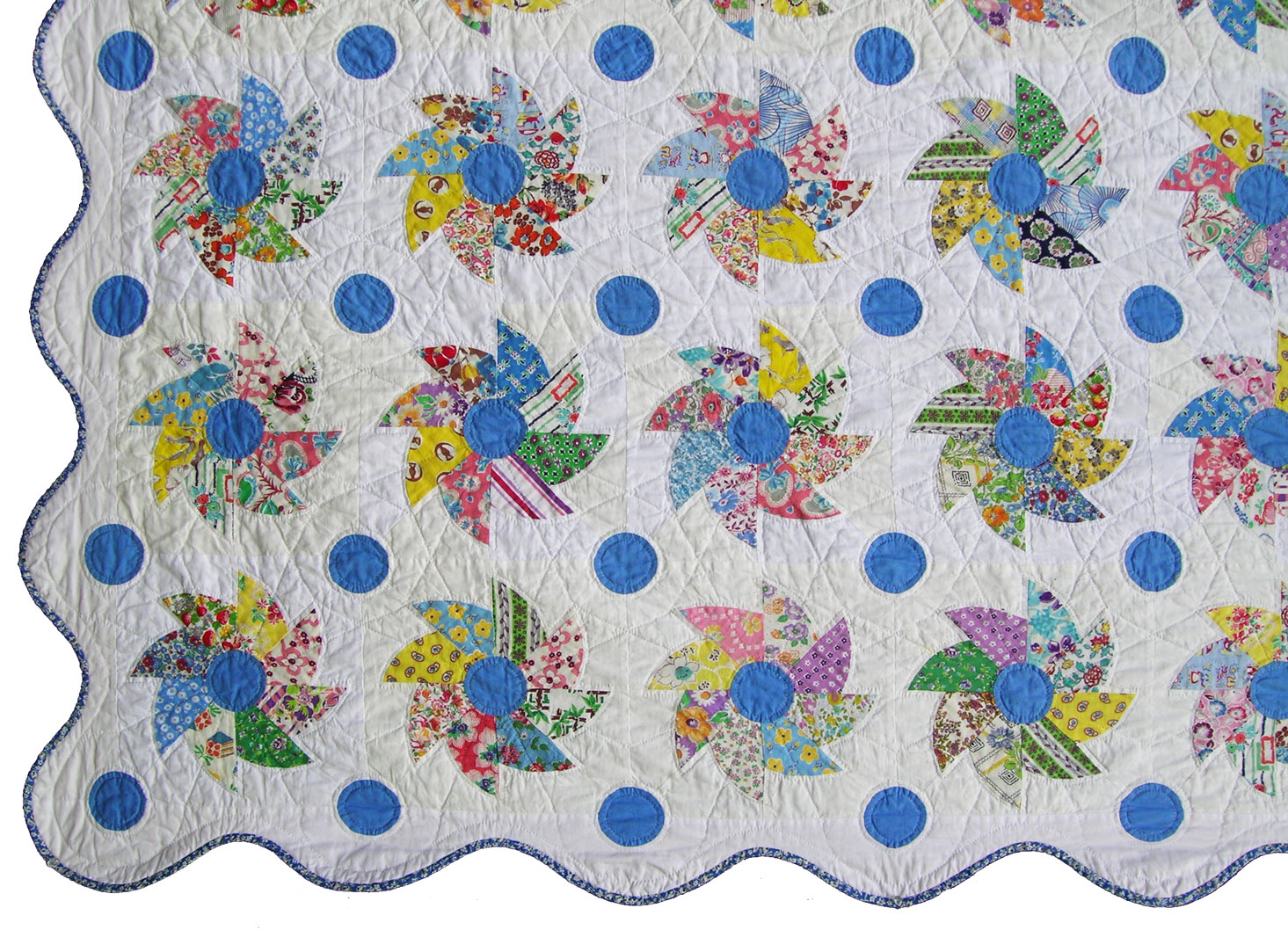 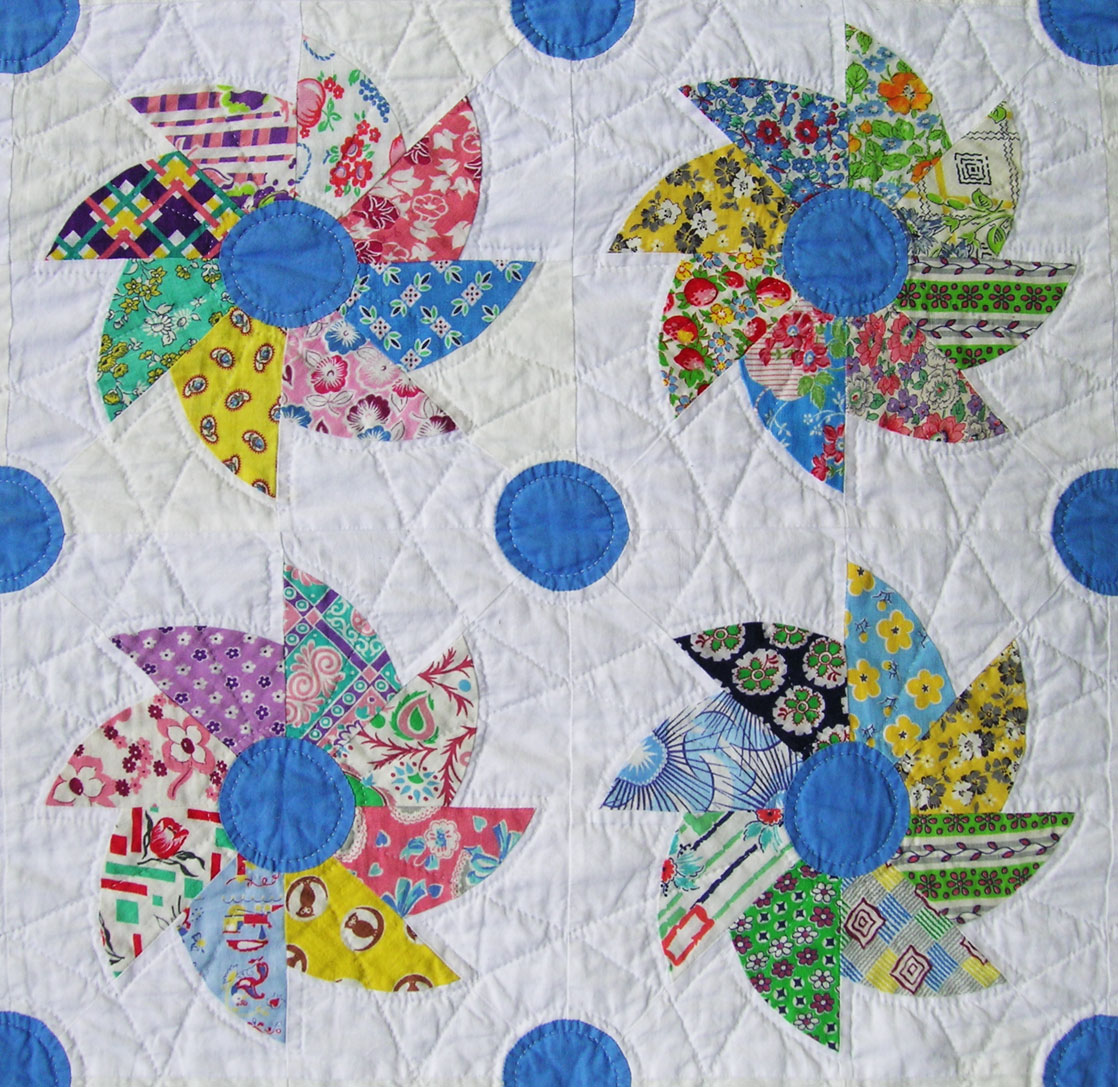 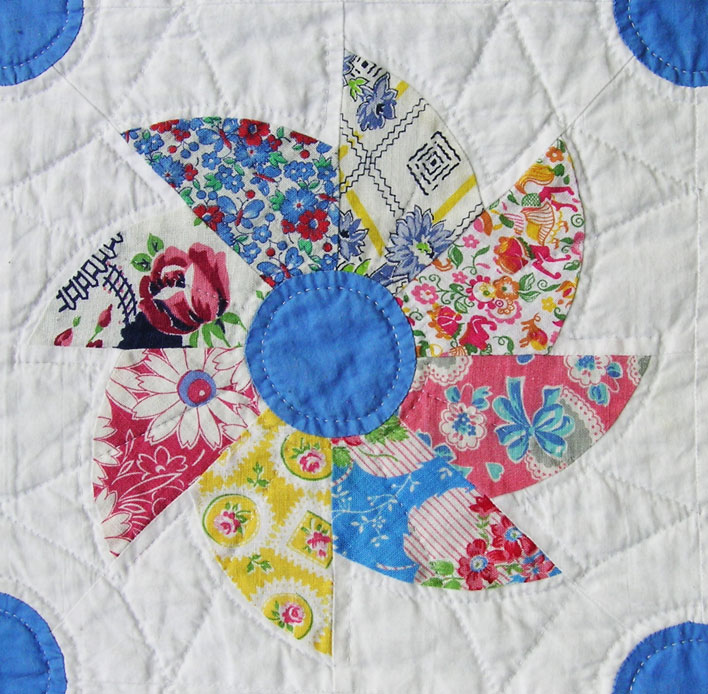 For some time now I have wanted to make an alphabet quilt. Although I own several vintage commercial ABC applique and embroidery patterns, they just haven’t inspired me. So, I bought a few vintage ABC coloring books on ebay — some of the drawings are very cute, but this one I love. It’s unusual because it’s much more detailed than my other ABC books and I like it that there are 6 different illustrations for each alphabet letter — 2 pages per letter (2 large drawings and 4 small).  I also like the style of the drawings and the fact that they go together so well — it reminds me of the Simple Objects Coloring Book from Doe-c-Doe.   I think I will stitch blocks with three designs (just like the page layout, but I may change the picture combination). Also, I haven’t decided whether I want to use just one color of thread — or one color for each block — or one color for each picture. I’ll just have to try one and see how it looks. 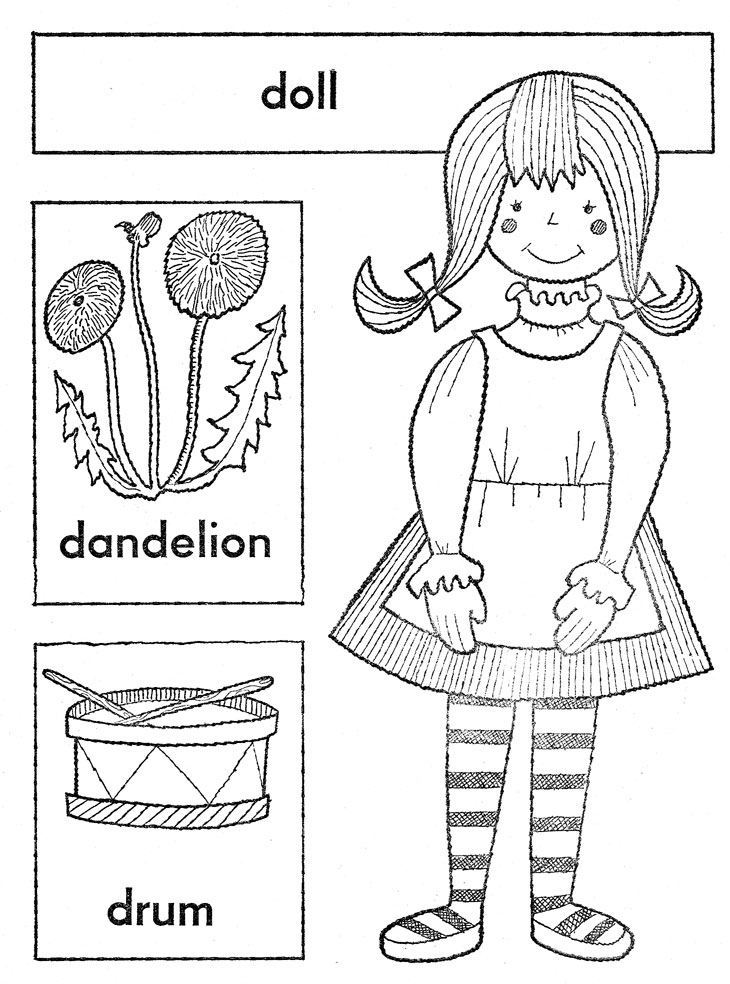 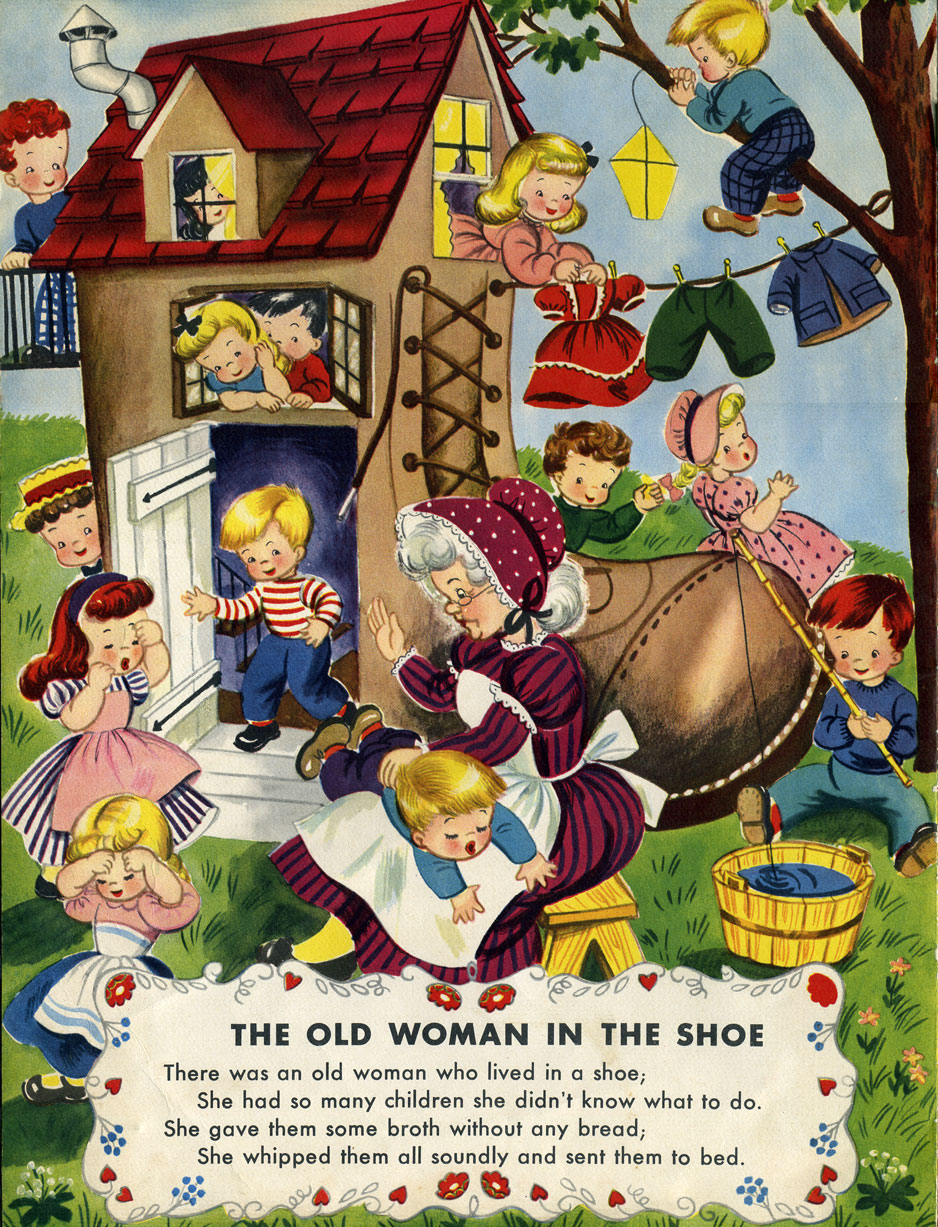 Emily and I went shopping for dresses the other day, but she didn’t find much that she liked. I thought I would try sewing some dresses for her, which I haven’t done in a long time (except for Halloween costumes). It’s a long process because I only see her about once a week so I have to wait all week for fittings. Also, Emily doesn’t fit the pattern measurements which are weirdly huge (Emily generally wears a size 2, but the closest pattern size for her is a 10).

I thought of buying a dressmaker’s dummy, but it turns out they cost much more than I am willing to pay. After checking online, I found two different methods of constructing a homemade dressmaker’s dummy — the duct tape method and the plaster method. I decided to do the plaster method — partly because I thought it would have more structural integrity and wouldn’t have to be stuffed with anything, but also because I thought it might be kind of fun to wrap someone up in plaster.

The instructions called for “Rigid Wrap” (sort of a cheesecloth with plaster embedded in it–available at Michael’s) which you dip in warm water and apply just like paper-mache.  Emily wore one of her old bras, and we wrapped her stomach with a thin gauze before applying the plaster.  It took about 20 minutes to harden enough to cut it off (up the sides and across both shoulders). I had to do a little repair work and then I clamped the two halves together to dry for a couple of days. 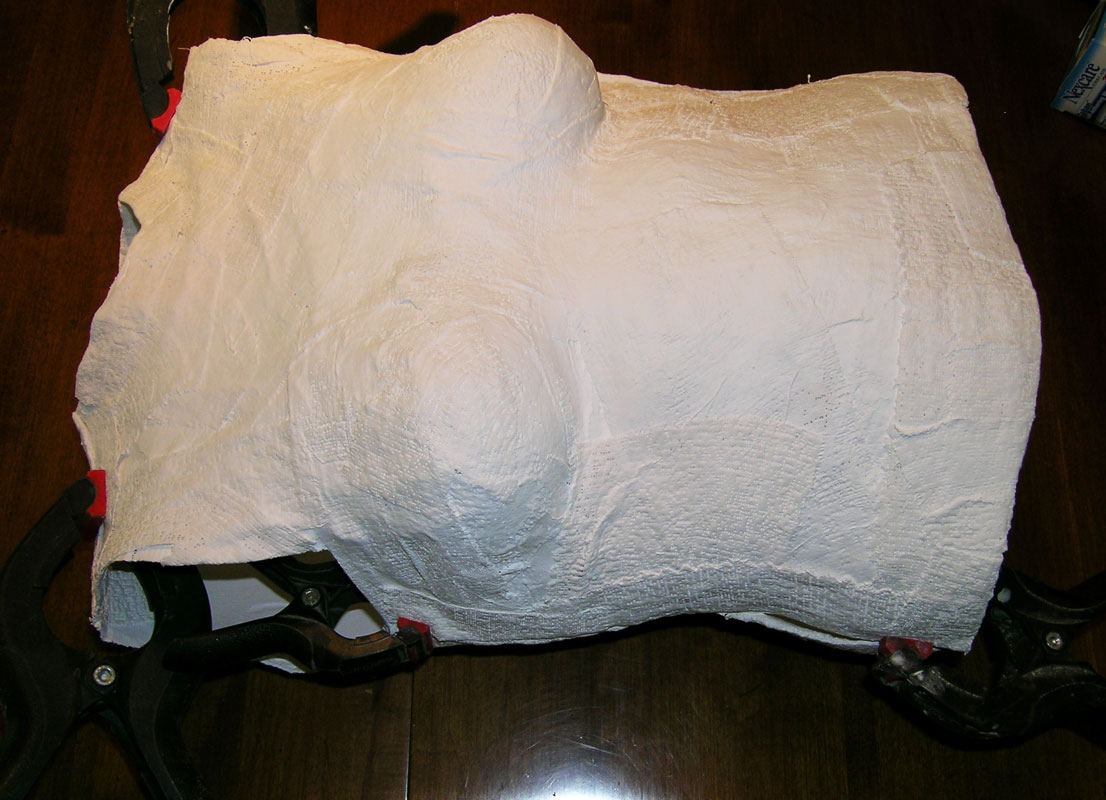 And here’s what it looks like after wrapping it in that stretchy athletic tape that sticks to itself. The tape allows you to pin stuff to the dummy. A little spray adhesive will make the first layer of tape stick to the plaster. I’m excited to try it out. 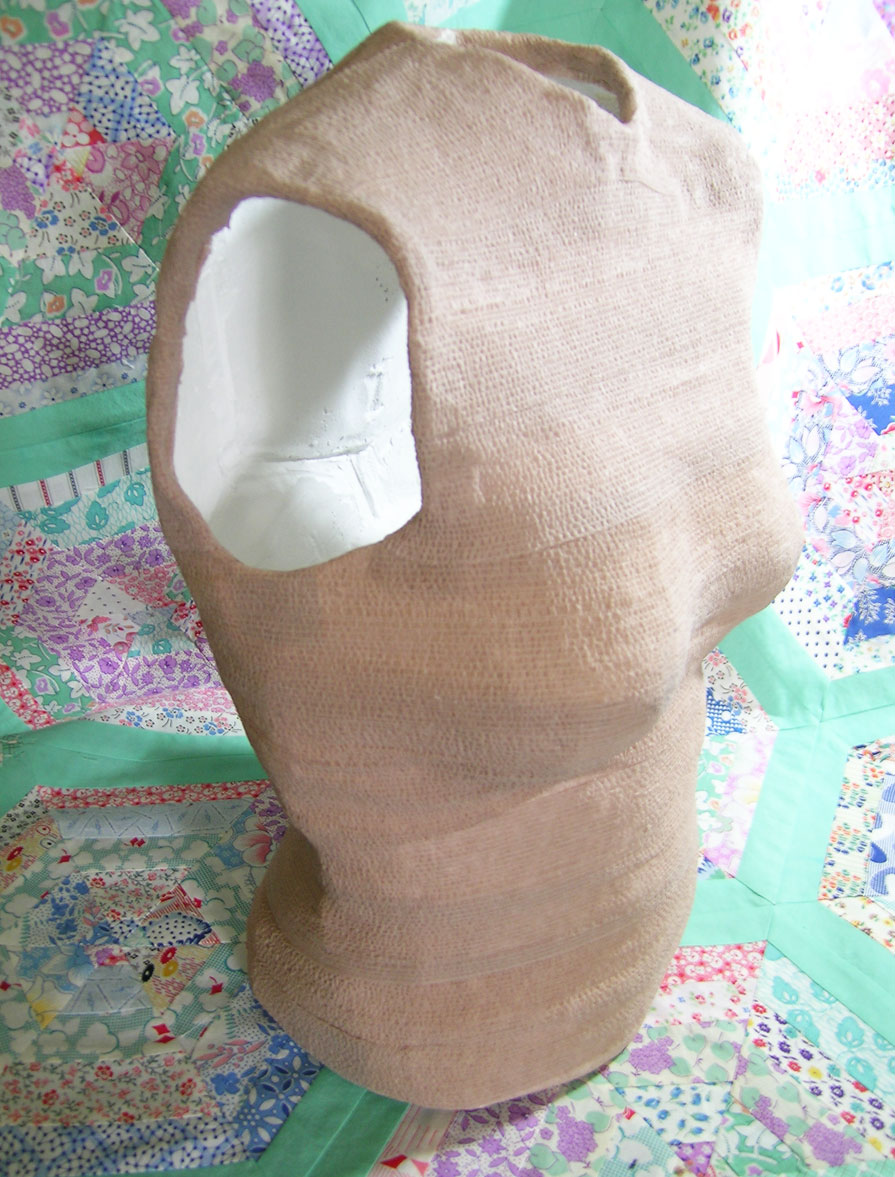 When I was a teenager in the early 60’s, I talked my mother into buying this sampler kit. I’m pretty sure it was offered in one of the tons of magazines we used to get. Because daddy worked in the advertising department at Phillips Petroleum, we received just about every magazine you could think of — all of them marked “sample copy.”

For some reason, it would take weeks for this stuff to make it through the mail system, so I was pretty excited when it finally arrived. The design was stamped on dark brown linen (I can’t remember if it had colored stamping or came with a chart) and included all the thread. Of course, I never finished it. I think I did one little motif and then the poor sampler sat around for months until my mother decided to finish it for me. I am famous for this technique of getting mother to finish my projects.

Later, mother and I (and all of my sisters) started doing counted cross stitch and we sort of looked down on these earlier stamped designs. I don’t understand why I thought that, because now I think they’re really cute. 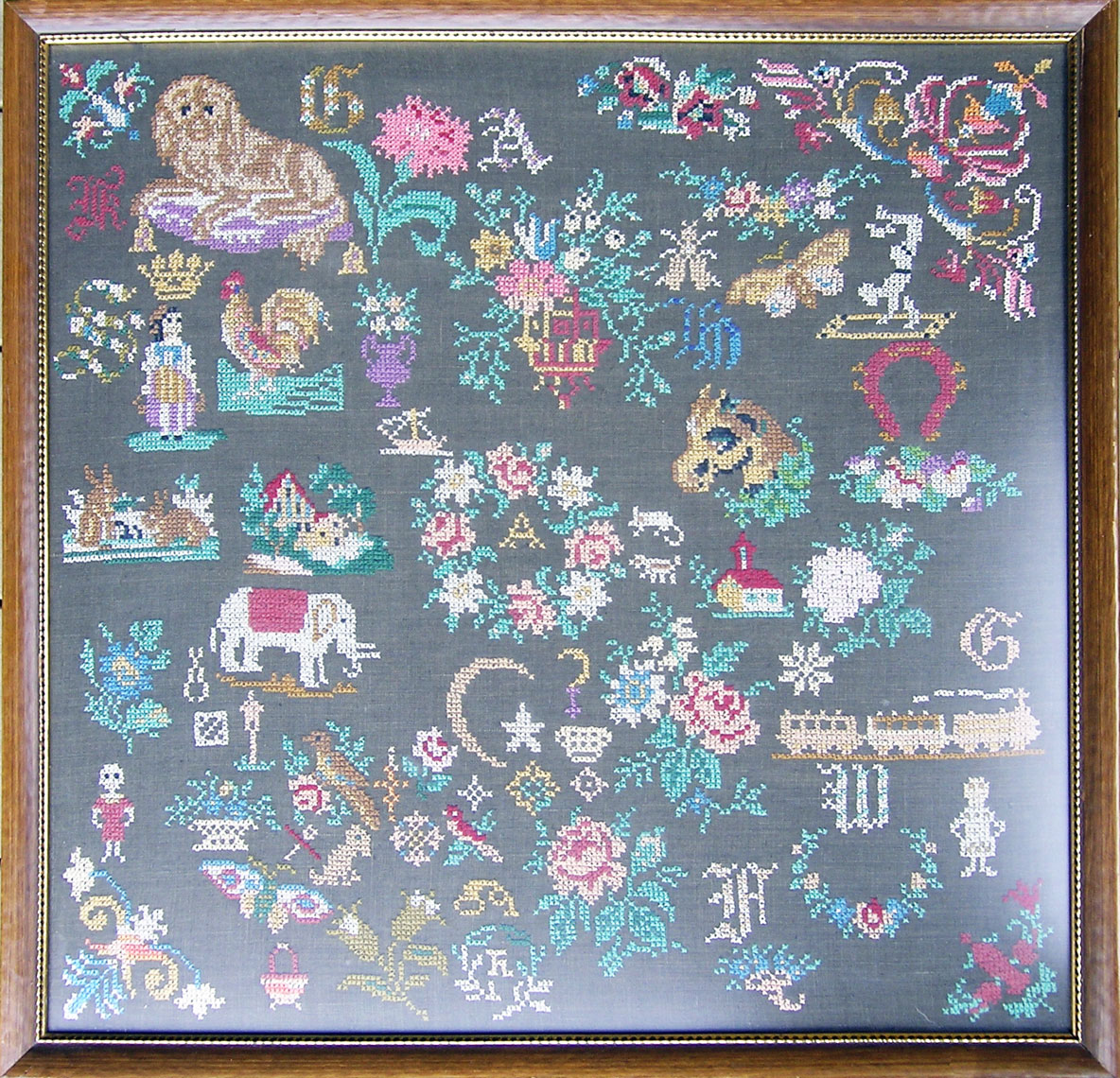 The Hazel Atlas Glass Company made several tea sets in the 40’s and 50’s. The earliest set was the Little Hostess, followed by the Sierra, and finally the New Century set, which is the one I found. Click here to find out more about Hazel Atlas tea sets for children. Unfortunately the New Century set was not designed with a teapot, but it does have the cute creamer and sugar bowl (which apparently are always pink). The original Little Hostess colors were pastel like mine, but the Sierra sets came in several different color schemes.

These little dishes were stacked with the regular cups and saucers at the Goodwill several years ago. It’s a complete 14-piece set, plus several extra pieces. At the time I purchased these dishes I had no idea who made them — I just loved the pastel colors and the milky glass — and they were only 50 cents each. 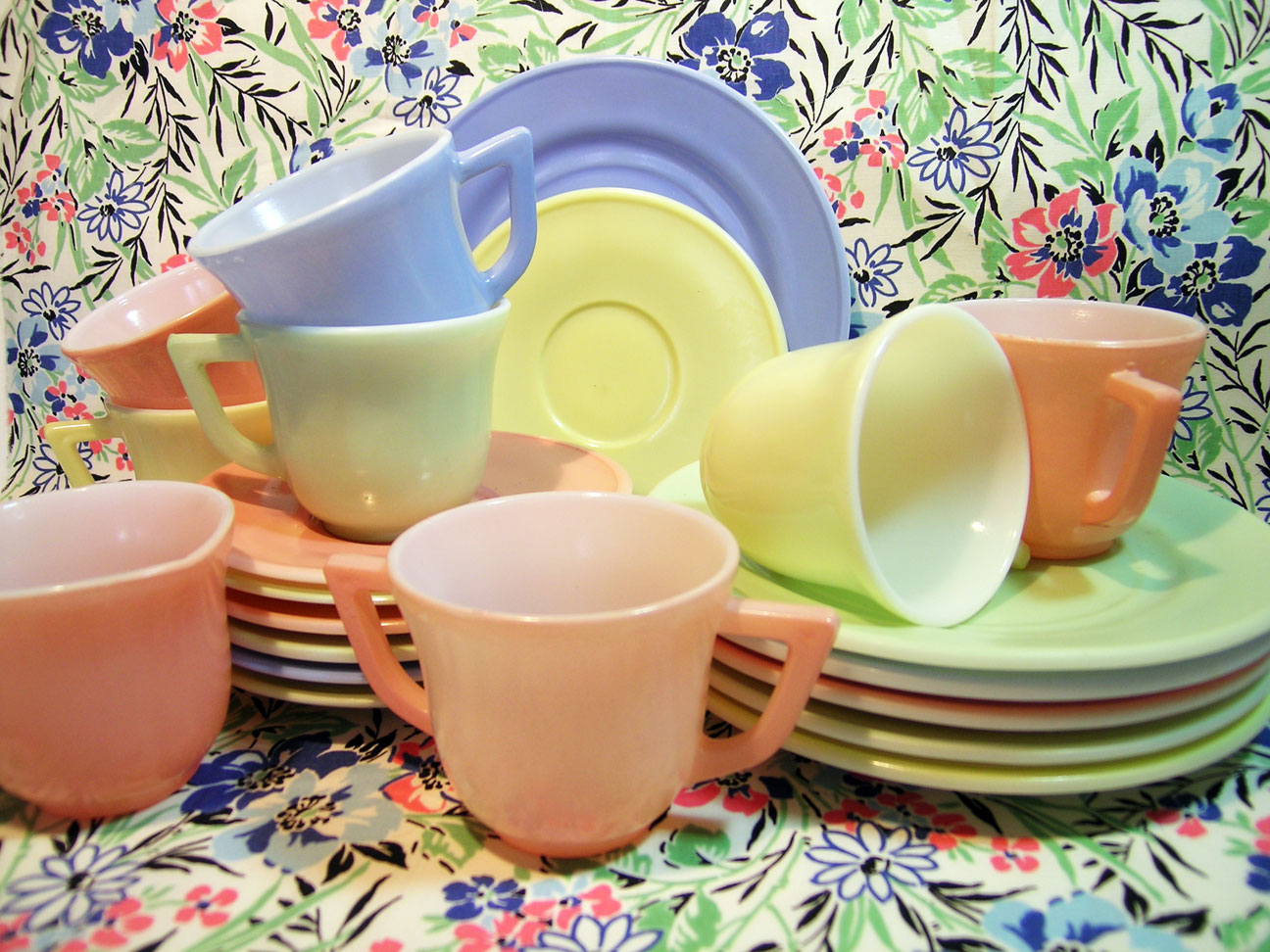 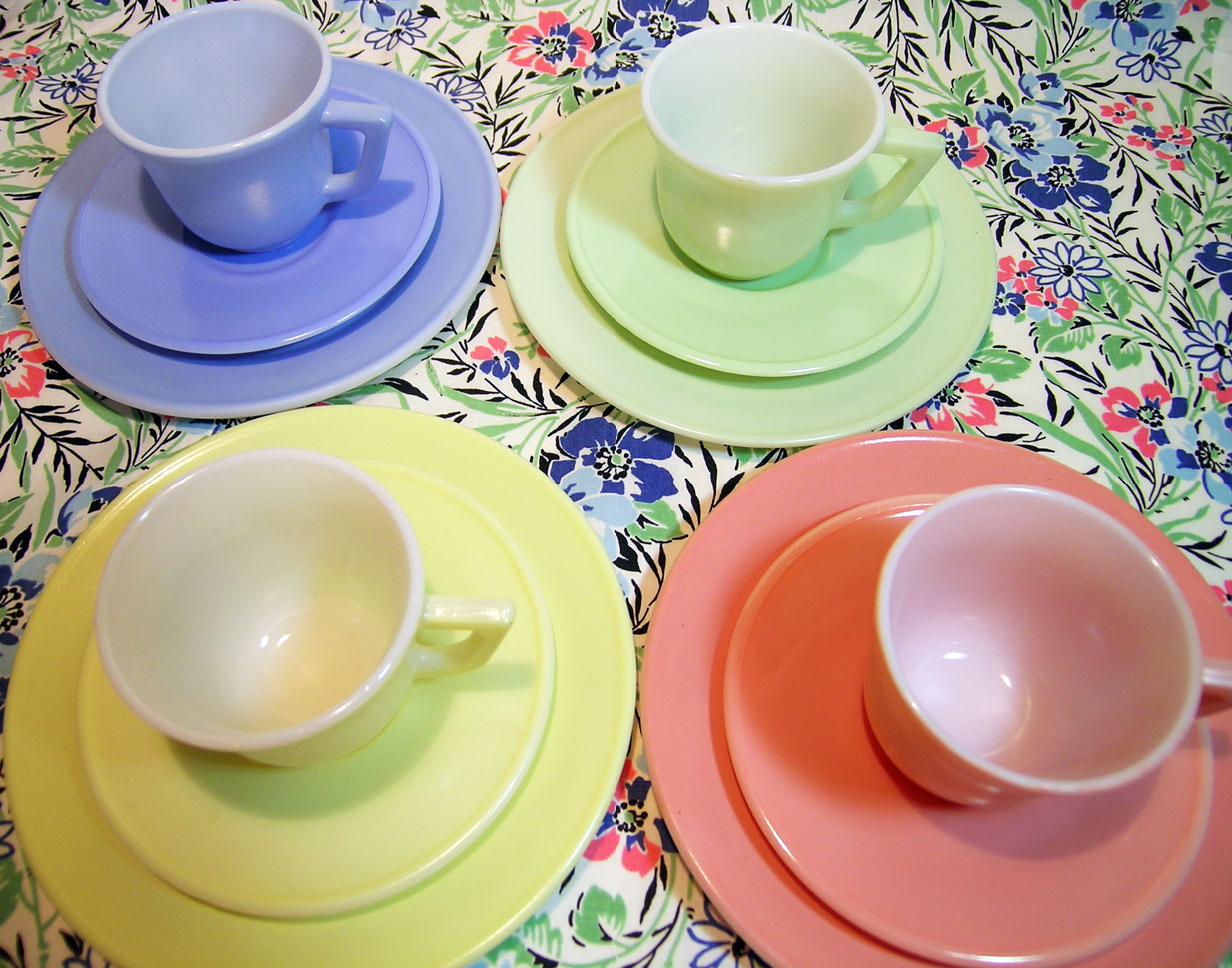 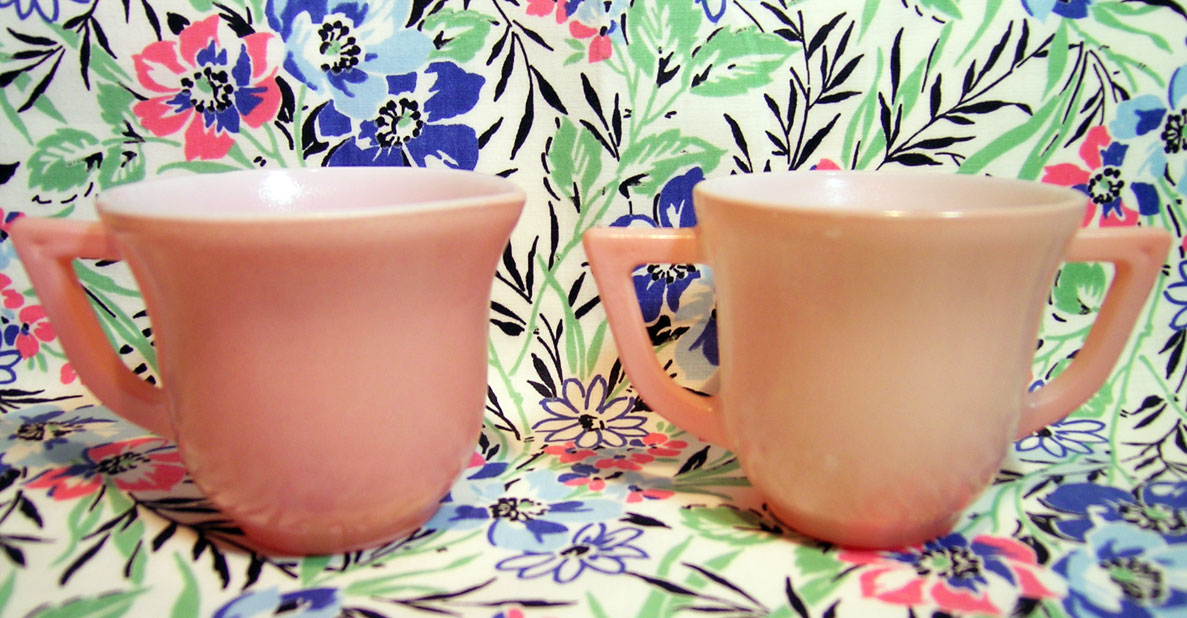 The Animal Paint Book characters are in the mood for spring — and so am I.  Friday is my day off and it’s supposed to reach 70 degrees today. The garden beds need lots of work, but I’ll probably just end up stitching instead.